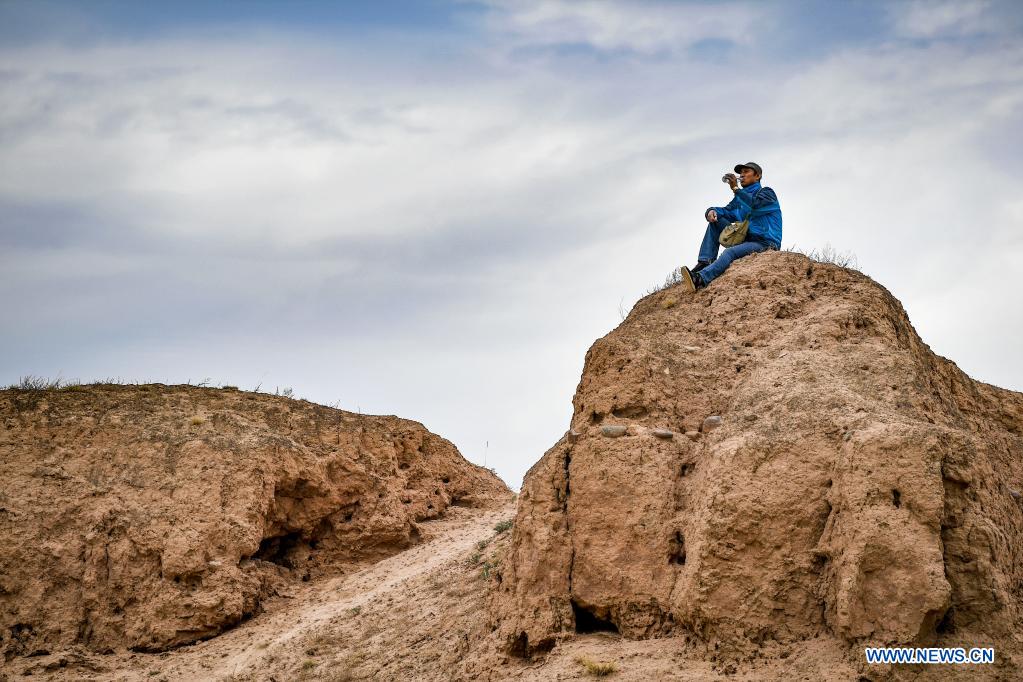 Li Shixiang rests while patrolling an ancient town in Haiyuan County, northwest China's Ningxia Hui Autonomous Region, Aug. 12, 2021. Li Shixiang, 45, lives in Haiyuan County in Ningxia and has been engaged in the research and protection of the Great Wall for over 15 years. When Li was a middle school student, he lived near an ancient town. The ancient walls and scattered ancient coins interested him and he visited the town with his friends every weekend. When he grew up, Li jointly ran a printing business, which gave him chance to visit different rural areas and discover some sections of Great Wall that were forgotten or lost in history. The experiences revived Li's old memories and interest. Since 2006, he started to systematically seek and study the undiscovered Great Wall sections in a hope that the remaining Great Wall will be known by people and put under protection. Starting from scratch in archaeology, Li Shixiang combined ancient records and documents with navigation system, driving or walking miles to find a possible spot. Over the past 15 years, Li has traversed many provinces and regions in north and northwest China such as Ningxia, Gansu and Hebei, written over 300 pieces of notes and taken over 100,000 pictures. In spite of the time and cost in search of undiscovered Great Wall sections, Li considers it worthwhile. Sometimes, he sleeps in his car next to the Great Wall. The starry sky, gusts of wind and bugs' singing by the ancient wall render inner peace and fulfillment to him. "I'm doing my best to protect the Great Wall, and I feel being blessed and connected with it," Li said. (Xinhua/Feng Kaihua)

As night fell in the Helan Mountain, Li Shixiang lit a mosquito-repellent coil, opened a book on the Great Wall and made notes using the headlights of his car alongside a section of the ancient wall he was reading about.

"It feels like we are guarding each other," Li said. He would spend the night in his car as he usually did.

The 45-year-old man lives in Haiyuan County in northwest China's Ningxia Hui Autonomous Region, known as a "Museum of the Great Wall." Ningxia has a total of over 1,500 km of the Great Wall built during multiple dynasties, with the most ancient section already 2,000 years old.

Born near the ruins of an ancient city, Li spent a lot of time there, playing with bronze coins and broken arrows after school. He said that the fun the cultural relics had brought him was unforgettable.

Li dropped out of a local college about 20 years ago and painted wall advertisings for a living.

When he was traveling and painting advertisements in rural areas, he noticed a lot of Great Wall sections and smoke towers that were left unrecorded and unprotected. He felt an urge to do something.

"The Great Wall symbolizes the Chinese nation as it conveys spirits such as solidarity, courage and peace," Li said. "I have a responsibility to get to know it and better protect it."

Not academically trained, Li has his own researching method. He firstly draws a scope where wall relics might exist based on related books and documents, and then searches on the satellite map.

If a promising location appears, he rides his motorbike or drives a car there immediately, with just a pen, a notebook, a tape measure, a cellphone and some food.

Most frequently, he drove all the way to one site only to find nothing. But there have also been surprises. In 2019, after five hours of driving, he found the relics of an ancient city in the desert of the neighboring Gansu Province.

"There was not a single footprint around. I was so excited that I cried and forgot my tiredness," Li said.

He has explored almost all of the areas of the Great Wall in China -- Beijing, Shaanxi, Hebei and Inner Mongolia. He has driven over 300,000 km, taken tens of thousands of photos and his writings have filled over 300 notebooks.

Over the years, he encountered wolves, fell into icy water, and once narrowly fell from a cliff. His eyes got hurt, and his toe was snapped. But all the pain was nothing compared to the pain he felt seeing sections of the Great Wall destroyed.

"Whether the 'culprits' were plants, wind, rain, animals or people, the sight of damaged Great Wall sections made me feel as if my own flesh had been gouged out," he said.

Fortunately, the country has been pouring efforts into the protection of the Great Wall. He himself was also hired as a Great Wall keeper by the local government in 2016, and his work has been acknowledged by the cultural relics protection department.

In August, China issued a plan for the construction of the Great Wall national cultural park, which would integrate cultural relics and resources of 15 provinces, autonomous regions and municipalities along the Great Wall for better protection and preservation.

He said his new plan was to write a book on the Great Wall. "There is a limit to what I can do. But at least I can make them remember."

Too much time with the Great Wall means less time for his family. But luckily for his three sons, their father often took them on his research missions and told them stories about night watchmen and archers in ancient times. Enditem