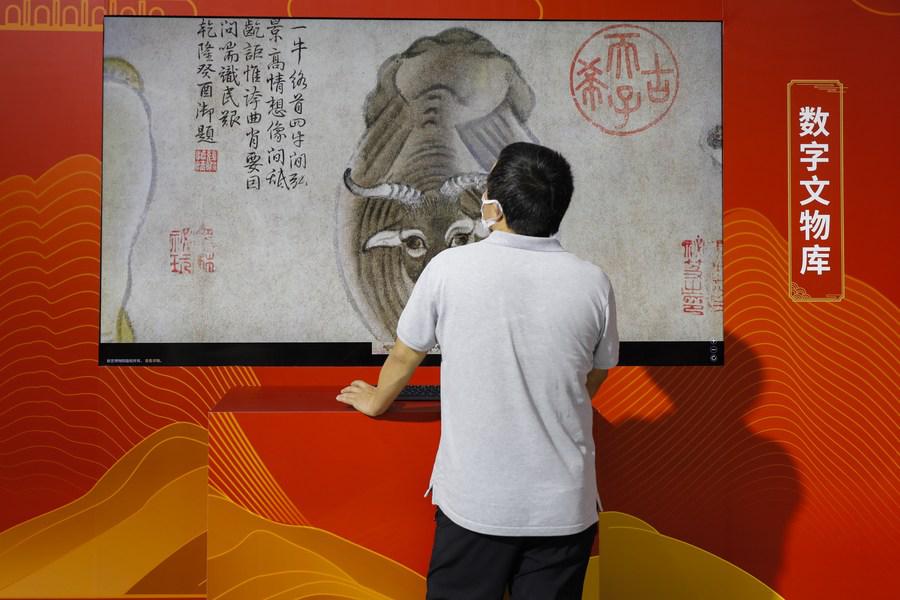 A visitor learns about cultural relics from digital resources at the booth of the Palace Museum during the 2021 China International Fair for Trade in Services (CIFTIS) in Beijing, Sept. 3, 2021. (Xinhua/Zhang Yuwei)

China's Palace Museum, also known as the Forbidden City, is stepping up the use of digital technology to boost its public appeal and international exchanges.

At the 2021 China International Fair for Trade in Services, a series of digital technologies, such as panorama photography, high-precision three-dimensional data collection, AI-powered smart glasses and voice interaction have rendered the museum fashionable and vibrant.

The 285-square-meter pavilion of the museum, showcasing the applications of digital technologies in archaeology, cultural relic protection and exhibition, was a hit at the services fair.

The digitalization of the Palace Museum has spanned more than 20 years, said Yu Zhuang, deputy head of the museum's digital and information department.

The fundamental purpose of the move is to permanently preserve, inherit and utilize such a large and precious human cultural heritage via digital technology, Yu added.

Currently, over 700,000 cultural relics have been digitalized in the Palace Museum, and basic digitalization is being promoted and accelerated in an orderly manner with 70,000 to 80,000 pieces being digitalized each year.

"We are trying to give all tangible cultural relics a digital identification," Yu said.

Frequent defacement of and damage to cultural relics across the world also make Yu feel an urgent need to speed up the digitalization of the Palace Museum.

Yu mentioned the dismantling and repair of an antique -- a clock decorated with a tower and an elevated pagoda. He said the whole process of the repair and every piece of the clock were recorded using three-dimensional data collection.

"If the collection and measurements are precise enough, we can use three-dimensional printing and other technologies to replicate this complex and sophisticated clock in the future," Yu added.

Museums in China have accelerated the pace of digitalization amid the COVID-19 pandemic, allowing housebound visitors to enjoy online exhibitions over the internet.

In the future, cultural relics in museums from all over the world can be easily gathered together in the virtual form to organize an international exhibition, facilitating dialogues and exchanges between civilizations and cultures, Yu said. "This is very exciting."

The achievements that the Palace Museum made in digitalization have been introduced to more than 200 countries and regions.

Leng Hanzhang, a member of Yu's department, said that the image segmentation technology used to offer clearer and closer sights of the painting masterpieces in the Palace Museum's collection at a pixel level is now widely applied in museums at home and abroad.

The digitalization work is for the purpose of permanently preserving the cultural heritage that has lasted for 600 years, Yu added.

"Embracing the future, the next 600 years of the Palace Museum will be still more brilliant."