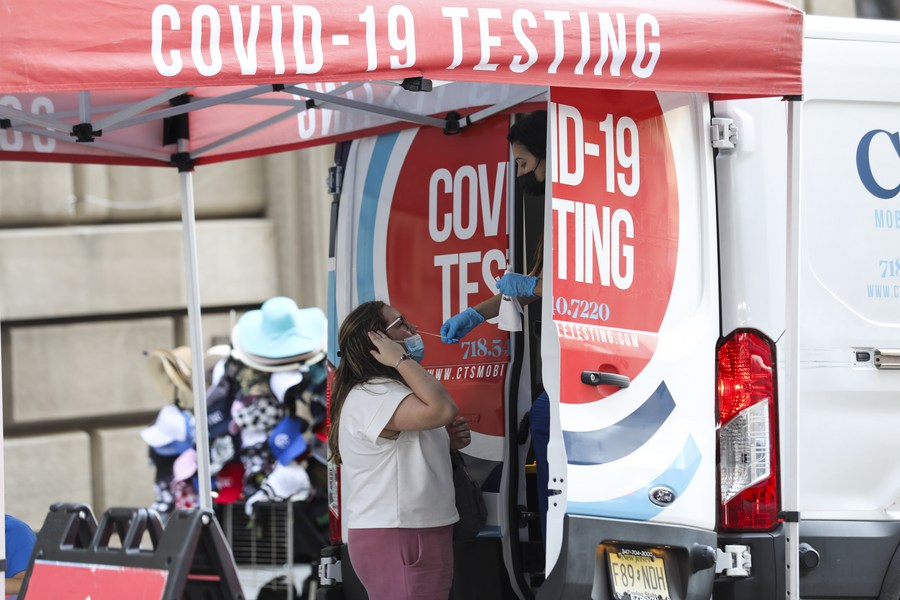 A booster shot for COVID-19 vaccination was debated in the United States on Friday, while the pandemic keeps charging forward, though some states are faring better than previous weeks, like California.

New coronavirus cases and COVID-19 hospitalizations across the United States have started to show signs of decline, although they remain far higher than they were earlier in the summer, and the number of new deaths is still increasing, reported NYT on Friday.

As the Delta variant has ripped through unvaccinated communities, reports of new deaths have reached an average of more than 1,900 a day, up nearly 30 percent in the past two weeks. Approximately one in every 500 Americans has died from the disease, said the report.

The pace of vaccinations remained relatively sluggish, with 64 percent of eligible people in the United States fully vaccinated, according to federal data. Health officials said that most of the patients who are being hospitalized and dying are not vaccinated, while areas with higher rates of vaccination have generally fared better, added the report.

Good news was that earlier this week, California dropped from "high" to "substantial" virus spread, according to the Centers for Disease Control and Prevention (CDC). It later bounced back up, but total new cases per 100,000 residents were still lower than any other state.

"An aggressive push for vaccines, coupled with masks mandates at the local level and a public largely willing to go along with them, appear to have helped flatten the state's curve," The Washington Post (WP) on Friday quoted experts as saying.

"California, as compared to many other states in the nation, took rapid steps to recognize the extent of the problem and to apply more COVID-19 control measures," Robert Kim-Farley, an infectious disease expert at UCLA Fielding School of Public Health, told WP. "I think if California had not taken these steps to curb transmission, we could have ended up with much higher levels."

The Golden State's change in CDC designation, a barometer of how well states are doing in combating the virus, was celebrated by public health officials, who suggested it was a signal that California could be close to a turning point. However, "the fight against Delta is far from over in California, which still faces a host of challenges in containing cases," said the report.

The U.S. government's push to introduce widespread COVID-19 vaccine boosters faced a test as a Food and Drug Administration (FDA) advisory panel met on Friday to weigh evidence on the extra shots, a topic that has divided federal health officials.

The outside panel of about 20 scientific advisers reviewed information about the Pfizer Inc. and BioNTech SE vaccine's declining protection against COVID-19 over time and on how people tolerated additional doses.

Pfizer has asked regulators to clear booster shots for people 16 years and older, and the FDA, which this week said all the shots cleared for use in the country remain effective without boosters.

While U.S. health officials, some other countries and vaccine makers have said boosters are needed, many scientists, including some inside the FDA and the CDC, disagree.

The FDA panel then voted to recommend COVID-19 vaccine booster shots for Americans 65 and older and those at high risk of severe illness, but rejecting a broader use of booster shots.

"Anything short of a full-throated endorsement could complicate the (U.S. President Joe) Biden administration's plan to begin distributing extra shots next week to bolster immunity among the vaccinated and counter highly transmissible variants of the virus such as Delta," reported The Wall Street Journal on Friday.