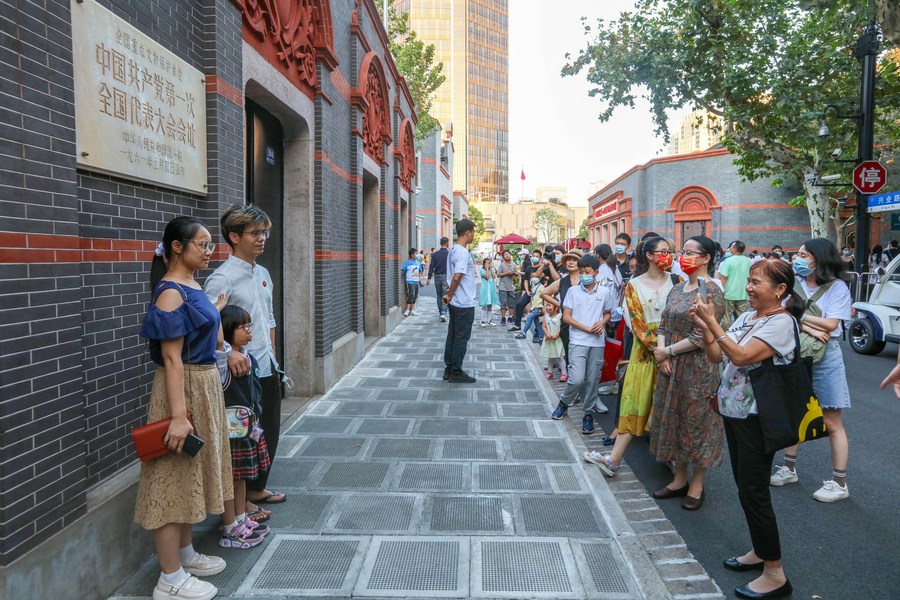 Tourists take photos at the site of the first National Congress of the Communist Party of China (CPC) in east China's Shanghai, Oct. 3, 2021. (Xinhua/Wang Xiang)

Zheng, 13, likes visiting revolutionary resorts and learning from the heroes who laid down their lives for the country.

"We should remember history and study hard to make our country more prosperous and stronger," said Zheng, from the provincial capital Taiyuan, while visiting the memorial hall of the Eighth Route Army in Wuxiang County.

Curator Shi Yongping said although it had been chilly and rainy since National Day on Oct. 1, the memorial hall received up to 6,000 visitors every day.

With extracurricular academic classes shut down and much less homework, Chinese students have spent the seven-day National Day holiday with more choices, such as watching movies, reading and traveling, especially to revolutionary resorts, or "red tours."

According to the online travel service provider Qunar, nearly 20 percent of the tourists who have booked red tours are under 25 years old, setting a record in recent years. Red tourism has become more popular in 2021 as the Communist Party of China centenary comes.

In response to society's growing concerns regarding the heavy workloads and wildly growing off-campus tutoring services, Chinese authorities in July issued a document specifying a set of requirements and guidelines aimed at pursuing a high-quality basic education and ensuring students' healthy growth and all-round development.

The guidelines called on schools to recalibrate homework assignments and improve classroom teaching to boost the efficiency of students' in-school study. At the same time, regulations over off-campus institutions providing curriculum subject-tutoring services are strengthened.

"No off-campus academic classes and lesser homework allow us to have more time to do many things together," said Chen Yun, the mother of a fourth-grader in Hefei, capital of east China's Anhui Province.

During the holiday, Chen and her child went to the theater to see the movie "The Battle at Lake Changjin," and visited the library twice. 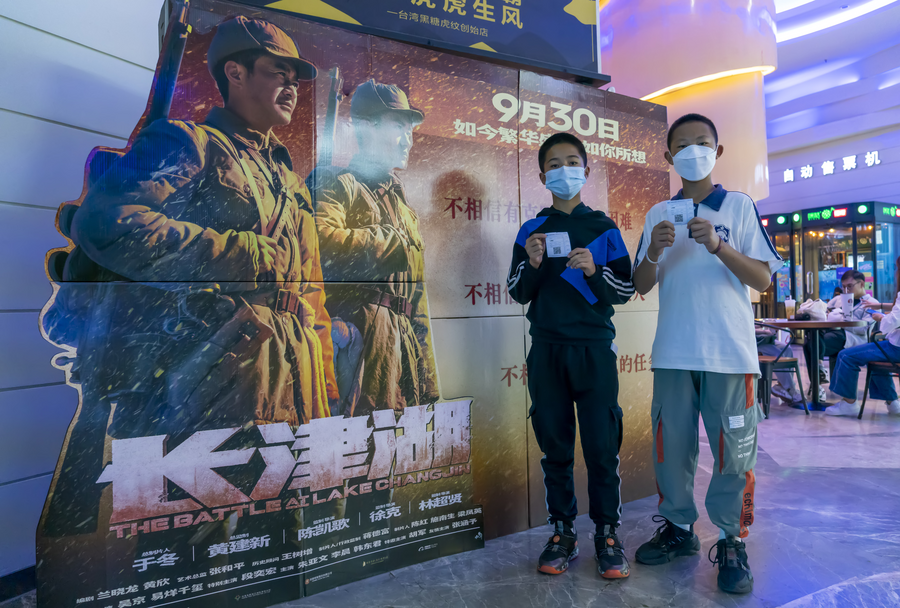 Two boys pose for a photo in front of a poster board for "The Battle at Lake Changjin" at a theater in Kunming, southwest China's Yunnan Province, Oct. 1, 2021. (Xinhua/Chen Xinbo)

The top earner is the domestic war epic "The Battle at Lake Changjin," with a box office revenue approaching 3.1 billion yuan by Thursday evening, according to the China Film Administration.

Despite the reduced school burden, first-grader Li Nuo surprised her father Li Changling by recognizing many Chinese characters on roadside signboards -- many words that she has not learned in school.

The father from Shenzhen, south China's Guangdong Province, often takes his daughter to the Shenzhen Pingshan Library in Pingshan District and has realized the importance of reading.

"Now I bring her here whenever I have time. I feel excited when I found she has learned a lot through reading," said Li Changling.

The library has received more than 10,000 visitors during the holiday.

Lu Qimei, the executive deputy curator of the library, said the library has set up 14 branches across the district.

"The library system has covered all subdistricts of Pingshan, providing residents with easier access to books," said Lu.