Over the past six years after Beijing won the bid to host the Beijing 2022 Winter Games, Chongli, a district of Beijing 2022’s co-host city Zhangjiakou, has taken full advantage of the opportunities provided by the Games to tap into the potential of its winter snow and ice resources, having increased the incomes of local residents and taken vigorous efforts to develop industries and improve the local environment. 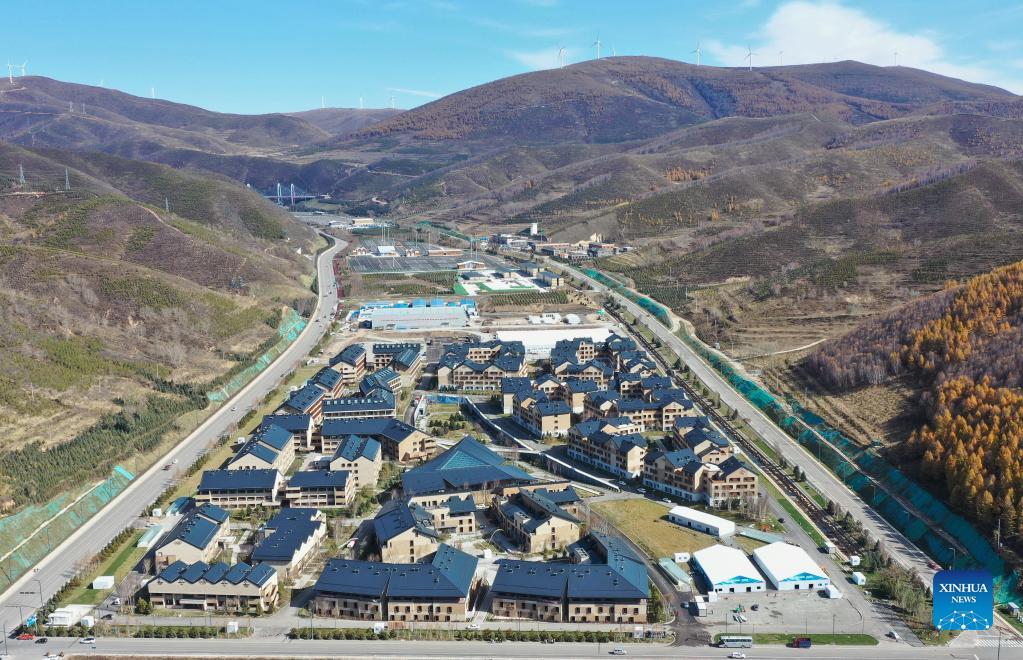 Aerial photo taken on Oct. 18, 2021 shows the Winter Olympic Village in Chongli district of Zhangjiakou City in north China's Hebei Province. With 100 days to go before the Beijing 2022 Winter Olympic Games, Chongli is ready to welcome the world. (Xinhua/Yang Shiyao)

As the winter season arrives, seven ski resorts in Chongli have opened for business since the end of October. Wu Chen, a ski enthusiast from Tianjin who has visited Chongli several times since 2015, witnessed the drastic changes Chongli has undergone over the past six years.

Six years ago, there was only one street in Chongli, but now the small town has a railway station built along the Beijing-Zhangjiakou high-speed railway. Six years ago, Chongli was an impoverished county, but now it has walked out of poverty and is moving forward on the road toward rural vitalization.

Zhao Chunxin, 55, is a local living in Chongli. Previously, Zhao’s farming activities and lifestyle were seriously encumbered by the long snow season, which would last for about 150 days; nowadays, these snow resources have become a valuable asset for local residents.

Zhao is currently serving as a security guard at the Taizicheng Snow Town in Chongli, which provides him with a stable monthly salary, while in the past the man was unable to earn a stable income, having worked as a truck driver during the snow season. “A hardworking person can always find a job here in Chongli,” said Zhao. Not only Zhao himself, but also his son and wife are also serving as employees at the snow town. Being stably employed, the family left their single-storey house for a three-bedroom apartment, with their living conditions having improved significantly.

Statistics have indicated that by 2019, there were nearly 30,000 people in Chongli who were directly or indirectly engaged in the ice and snow industry, including 9,000 residents who were previously impoverished. On May 5, 2019, Chongli bid farewell to poverty.

Chongli has built seven large ski resorts with a total of 169 ski tracks. After Beijing won the bid to host the Beijing 2022 Winter Games, Chongli stepped up its efforts to boost the locality’s snow and ice tourism industry. Ren Xiaoqiang, a brand promotion manager at the Thaiwoo Ski Resort in Chongli, said the ski resorts are a kind of name card for Chongli.

After years of exploration, the Thaiwoo Ski Resort is nowadays able to attract visitors from around the country all year around. In spring, it offers a space for companies to host team building activities; in summer, it is a destination for people to avoid the heat; in autumn, it becomes an ideal place for photography enthusiasts; and in winter, it becomes a place where snow and ice activities and sports competitions, as well as music festivals, take place.

“The ski resort is popular for quite a lot of southerners as well,” Ren said. In the summer season of 2019, Thaiwoo Ski Resort received 220,000 tourist arrivals, up 65 percent year-on-year. If the resort maintains this momentum, it’s likely that the tourist arrivals it sees in the summer season will catch up with that of the winter season, which will turn the ski resort into a scenic spot that can enjoy robust operations all year round.

On Dec. 30, 2019, the Beijing-Zhangjiakou high-speed railway opened to traffic. With a maximum speed of 350 kilometers per hour, the rail line slashes the travel time between Beijing and Zhangjiakou to about 50 minutes from more than three hours previously, injecting dynamism into the integrated development of rural and urban areas in the region.

BACK TO TOP
Edition:
Chinese | BIG5 | Deutsch
Link:
About CE.cn | About the Economic Daily | Contact us
Copyright 2003-2020 China Economic Net. All right reserved
Snow and ice industry revitalizes Chongli as locality ramps up as a major competition zone for Beijing 2022
Source:People's Daily Online | 2021-11-25 11:06
Share to
0