With infection rates mounting, the Omicron variant has ushered in a new and disorienting phase of the pandemic in the United States, leaving ordinary Americans dismayed, squeezed and frustrated on many fronts from parenting and infection tests to hospital surgeries.

There are reasons for heightened concern and consolation: Omicron is more transmissible than previous variants, yet it appears to cause milder symptoms in many people, reported The New York Times on Sunday.

Meanwhile, hospitalizations have soared to new highs in some states, but "incidental patients" -- people who test positive for COVID-19 after being admitted for another reason -- make up close to half of the cases in some hospitals, said the report.

Public health officials have halved the recommended isolation period for people with positive tests to five days from 10 days, while suggesting people upgrade their masks from cloth to medical-grade when possible.

"Omicron has turned, quickly, into something that is just different," Allison Arwady, Chicago's top health official was quoted saying.

The latest surge in coronavirus cases prompting school and day-care closures has thrust U.S. parents back into familiar terrain, trying to navigate work obligations with a changing patchwork of testing protocols, quarantines and a possible return to virtual schooling, reported The Washington Post on Saturday.

At least 5,225 schools were disrupted for at least part of this past week because of the pandemic, easily a record for the current school year, according to the data firm Burbio. Public schools in Atlanta and Detroit went completely virtual this week, while others are making decisions on a school-by-school or class-by-class basis.

"Those disruptions -- and the cascading impact on working parents and their employers -- threaten economic growth in uneven ways, economists say, with single mothers, low-income families and other economically vulnerable groups being most affected," said the report.

Meanwhile, a tight labor market -- with roughly 1.5 job openings for every unemployed worker -- and difficulty finding and securing workers, "may end up giving some workers extra leverage in dealing with child-care issues," it added. 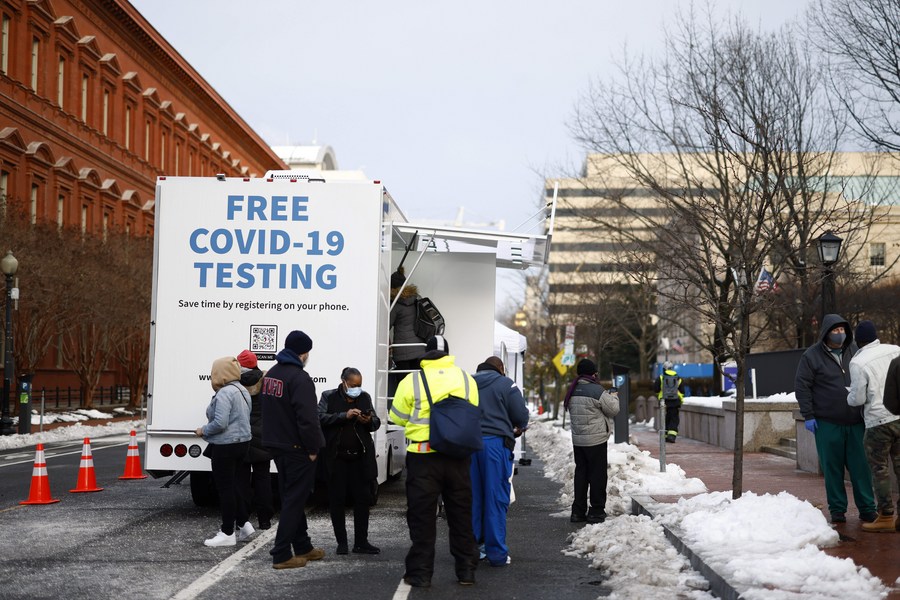 Escalating demand for COVID-19 tests is prompting some laboratories to ration access, "giving priority to people with symptoms or other health concerns as the Omicron variant quickly spreads," reported The Wall Street Journal on Sunday.

Triaging who is eligible for COVID-19 tests can help ensure that patients who need a test the most get results fast enough to isolate or get treatment, but the strategy risks perpetuating the virus's spread if some people get turned away from testing altogether.

"What we don't want is for people to not be able to get tested in the community and then show up at the ER to get testing," Melissa Miller, director of university's microbiology lab. "But there is a maximum amount that you can collect in a day."

New York State experienced another record-breaking day with 90,132 new positive cases of COVID-19 reported on Saturday. On Friday, the state revealed pediatric hospitalizations for COVID-19 increased eight-fold from early December to late month, with the vast majority of the children unvaccinated.

"Hospital concerns have taken a renewed focus in upstate New York, with the state announcing on Saturday the suspension of elective surgeries at 40 hospitals," reported NBC on Saturday. The overwhelming majority of impacted hospitals reside in the Mohawk Valley, Finger Lakes and Central New York regions, but no hospitals in New York City were added to the list.

Those hospitals in the state's "high risk regions" must postpone the surgeries for at least two weeks while officials track the latest incoming data and hospital capacity. "We will use every available tool to help ensure that hospitals can manage the COVID-19 winter surge," Acting State Health Commissioner Mary T. Bassett was quoted as saying.

Meanwhile, the U.S. Centers for Disease Control and Prevention said Omicron has not reached its peak in the United States, but that could happen sooner than expected if the numbers in New York this week are any indication of what might come next.