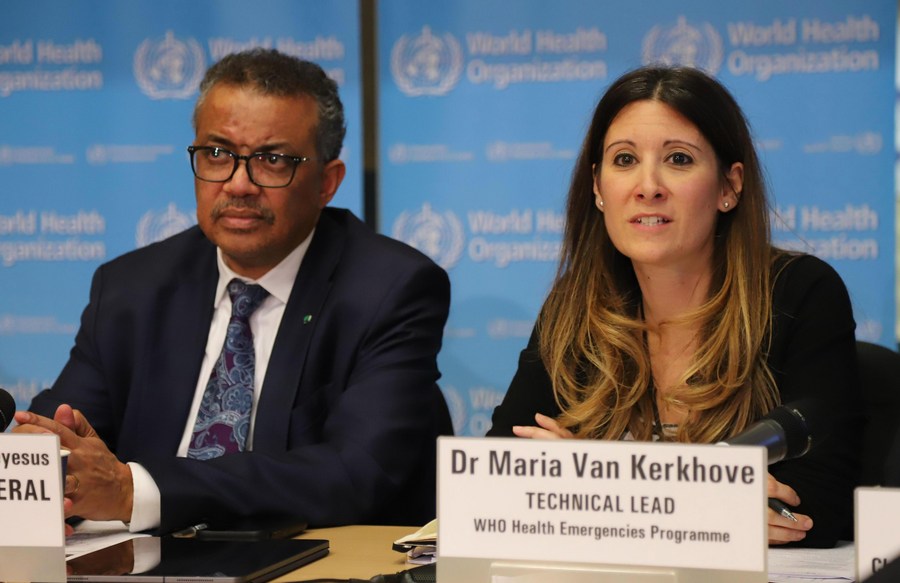 Maria van Kerkhove (R), technical lead for the Health Emergencies Program of the World Health Organization (WHO), speaks at a daily briefing in Geneva, Switzerland, on March 3, 2020. (Xinhua/Chen Junxia)

The World Health Organization (WHO) on Wednesday cautioned and urged for preparedness against concurrent outbreaks of COVID-19 and other respiratory diseases during the coming spring.

Dr. Maria van Kerkhove from the WHO's Health Emergencies Program, said at a press briefing that this could happen as population mixing increases, and as other respiratory pathogens such as influenza circulate in spring.

More than 15 million new COVID-19 cases were reported to WHO from around the world last week, by far the most cases reported in a single week. This has been driven by "the Omicron variant rapidly replacing Delta in almost all countries," according to WHO Director-General Tedros Adhanom Ghebreyesus.

Meanwhile, the number of weekly reported deaths has remained stable since October last year, at an average of 48,000.

While the number of patients being hospitalized is increasing in most countries, it is not at the level seen in previous waves. That is possibly due to the reduced severity of Omicron and widespread immunity from vaccination or previous infection, he said.

"Let's be clear: while Omicron causes less severe disease than Delta, it remains a dangerous virus, particularly for those who are unvaccinated," said the WHO chief.

The organization has constantly warned that the sheer volume of cases is putting a heavy burden on healthcare systems.

"We will have to see what happens as this virus evolves," said Van Kerkhove, warning of future outbreaks among those who are unvaccinated and not well protected.

Severe disease and death can be reduced by vaccination, as well as by improving clinical care, she said. However, this does depend on the nature of the interventions.