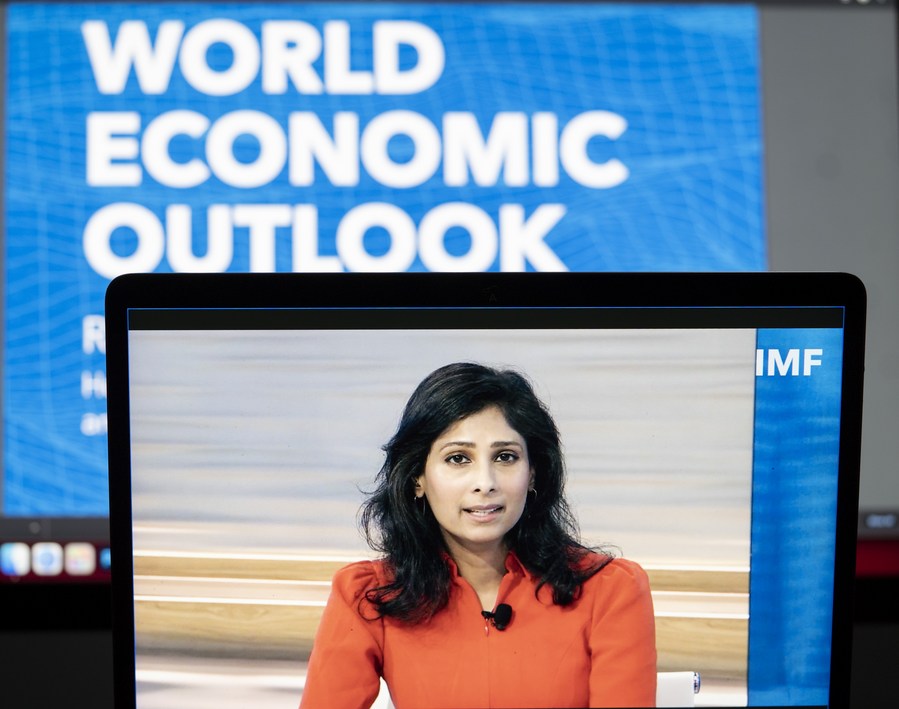 Then International Monetary Fund (IMF) Chief Economist Gita Gopinath speaks at a virtual press briefing during the annual meetings of the IMF and the World Bank Group in Washington, D.C., the United States, on Oct. 12, 2021. (Xinhua/Liu Jie)

The International Monetary Fund (IMF) on Tuesday projected the global economy to grow by 4.4 percent in 2022, down by 0.5 percentage points from October's forecast, according to a newly released update to its World Economic Outlook report.

"The rapid spread of the Omicron variant has led to renewed mobility restrictions in many countries and increased labor shortages," said Gopinath, who was previously the IMF's chief economist.

She added that while Omicron will weigh on activity in the first quarter of 2022, this effect will fade starting in the second quarter.

"Supply disruptions still weigh on activity and are contributing to higher inflation," adding to pressures from strong demand and elevated food and energy prices, said Gopinath.

Supply-demand imbalances are assumed to decline over 2022 based on industry expectations of improved supply, as demand gradually rebalances from goods to services, and extraordinary policy support is withdrawn, according to the latest report.

The IMF has revised up 2022 inflation forecasts for both advanced and emerging market and developing economies, with elevated price pressures expected to persist for longer. Assuming inflation expectations remain anchored, inflation is expected to subside in 2023.

The forecast, however, is subject to high uncertainty and risks overall are to the downside, including the emergence of deadlier variants, said Gopinath.

With interest rates rising, low-income countries, of which 60 percent are already in or at high risk of debt distress, will find it increasingly difficult to service their debts, she warned, calling for a revamp of G20 Common Framework to deliver more quickly on debt restructuring. 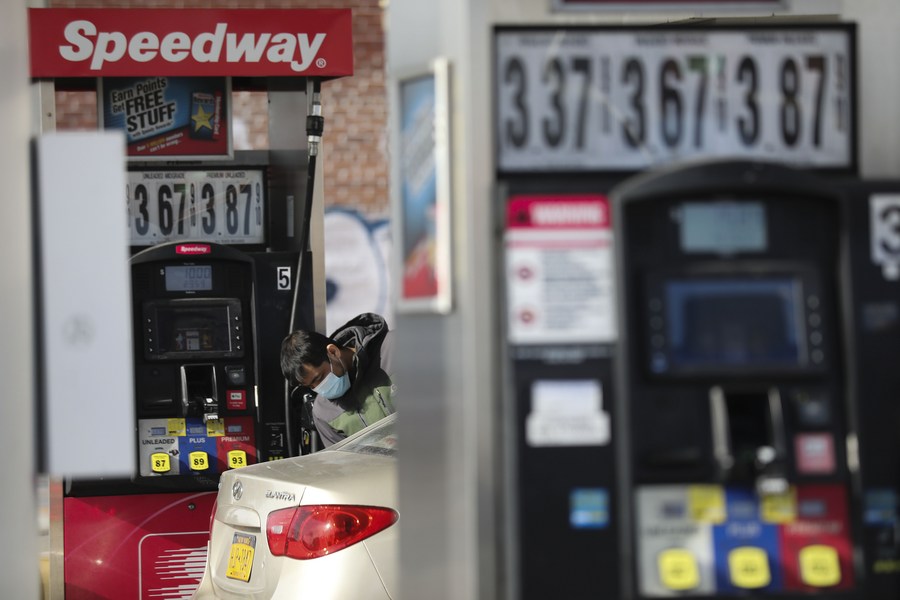 A man fills his car at a gas station in New York, the United States, Jan. 12, 2022. U.S. consumer prices in December continued to rise at the fastest annual pace in almost 40 years. (Xinhua/Wang Ying)

As of now, only 4 percent of the populations of low-income countries are fully vaccinated versus 70 percent in high-income countries, according to the multilateral lender.

There is an "urgent" need to close the 23.4-billion-U.S.-dollar financing gap for the Access to COVID-19 Tools Accelerator, a global platform led by the World Health Organization, and to incentivize technological transfers to help speed up the diversification of global production of critical medical tools, especially in Africa, Gopinath said.

At the national level, she said, policies should remain tailored to country-specific circumstances including the extent of recovery, underlying inflationary pressures and available policy space.

Gopinath noted that much work remains to ensure the losses are contained and to reduce wide disparities in recovery prospects across countries. Policy initiatives, she said, are needed to reverse the large learning losses suffered by children, especially in developing countries.

On climate, a "bigger push" is needed to get to net-zero carbon emissions by 2050, with carbon pricing mechanisms, green infrastructure investment, research subsidies, and financing initiatives, she added.

"Policymakers must vigilantly monitor a broad swath of incoming economic data, prepare for contingencies, and be ready to communicate and execute policy changes at short notice," she said. "In parallel, bold, and effective international cooperation should ensure that this is the year the world escapes the grip of the pandemic."

The IMF expects global growth to slow to 3.8 percent in 2023. This is 0.2 percentage points higher than in the IMF's World Economic Outlook last October and largely reflects a pickup after current drags on growth dissipate, according to the latest report.