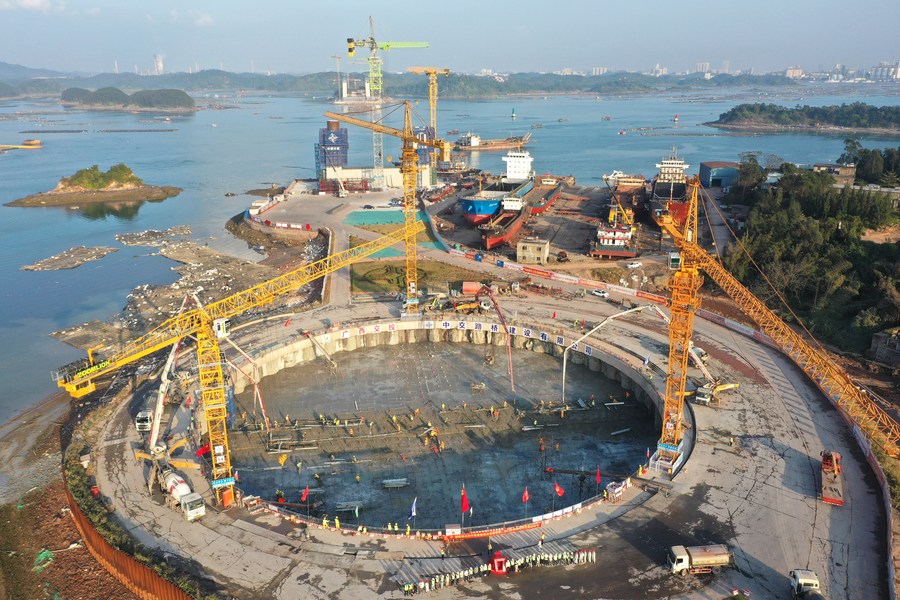 Aerial photo taken on Dec. 16, 2021 shows the construction site of the Longmen Bridge in Qinzhou City, south China's Guangxi Zhuang Autonomous Region. Located in the city of Qinzhou, the Longmen Bridge, a cross-sea bridge serving as a part of an expressway connecting coastal cities along the Beibu Gulf of Guangxi, stretches 7.6 km, with the main bridge span measuring 1,098 meters in length. (Xinhua/Zhou Hua)

A northbound train loaded with Thai starch departed from the city of Qinzhou in southern China's Guangxi Zhuang Autonomous Region on Saturday, while a southbound train carrying aluminum wheels and other goods left the city of Luohe, central China's Henan Province, at the same time. The two trains will arrive in their respective destinations of Luohe and Qinzhou in four days.

"The expansion of the land-sea freight service from western China to central China's Henan is of great significance in promoting connectivity between central and western parts of the country, which can ensure that the opportunities brought by the Regional Comprehensive Economic Partnership (RCEP) are shared by more people," said Shu Zixun, deputy general manager of the Guangxi branch of China United International Rail Containers Co., Ltd.

"In the future, goods and raw materials from the central province will be continuously transported to the markets of RCEP member countries through this channel," Shu added.

ASEAN countries have become the second-largest trading partner of Henan Province. Thanks to the land-sea freight service, goods exported from Henan are transported by rail to Qinzhou Port in Guangxi and then shipped by sea to ASEAN countries, slashing the transportation time by about seven days.