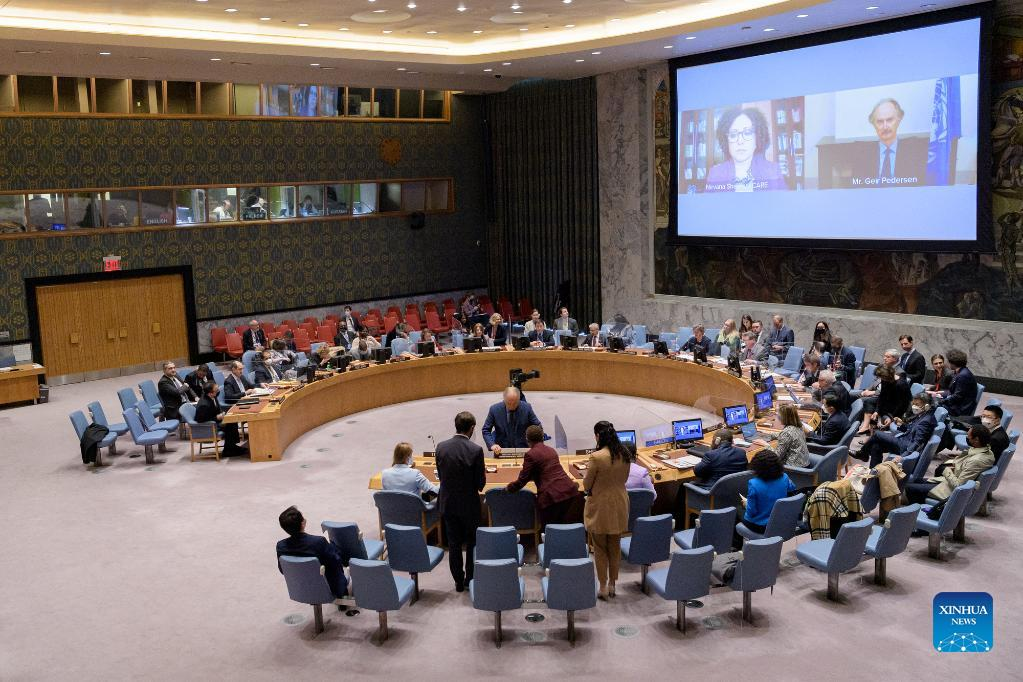 UN Special Envoy for Syria Geir Pedersen (R, on the screen) speaks via a video link at a Security Council meeting on the situation in Syria, at the UN headquarters in New York, on April 26, 2022. Geir Pedersen warned Tuesday that the Syria crisis should not be neglected despite its absence from news headlines. (Manuel Elias/UN Photo/Handout via Xinhua)

UN Special Envoy for Syria Geir Pedersen warned Tuesday that the Syria crisis should not be neglected despite its absence from news headlines.

"Syria is a hot conflict, not a frozen one," he told the Security Council in a briefing.

"Therefore my message today is simple: focus on Syria. The current strategic stalemate on the ground and Syria's absence from the headlines should not mislead anyone into thinking that the conflict needs less attention or fewer resources, or that a political solution is not urgent," he said. "Indeed, a conflict of this scale requires a comprehensive political solution in line with Security Council Resolution 2254."

Airstrikes in the Northwest picked up again and there have been intensified clashes around Afrin and the Northeast, amid continued exchanges of rocket fire and shelling across all front lines, improvised explosive devices, car bombs and other security incidents, he said.

Terrorism is still a significant threat, with at least two listed terrorist groups carrying out operations or holding territory. It is worrying that Islamic State attacks are picking up once again, following a relative lull in February, he said.

Syria is still among the greatest humanitarian crises in the world. While the displacement in Ukraine is tragically catching up, Syria remains the biggest displacement crisis in the world, with 6.8 million refugees and 6.9 million internally displaced persons. Syrians across the country still face a devastating economic crisis after more than a decade of war and conflict, corruption, mismanagement, the Lebanese financial crisis, COVID-19, and sanctions -- and now the economic spillover of the Ukraine conflict, he said.

The World Food Programme notes that between 2019 and 2021, the price of basic food items increased by a staggering 800 percent. Syrians have been forced to ration energy products, or to choose between buying food, fuel or medicine. This economic predicament will only fuel the displacement crisis and humanitarian crisis, with knock-on effects for stability in the region and beyond, he warned.

"We can always do more to alleviate the worst effects of this crisis with humanitarian assistance and indeed we should continue to do so. But there are plainly also other steps that can be taken to address the various measures and dynamics, internal or external, that are contributing to this crisis," he said.

Many of the things that Syrians suffer from most are inherently political in nature. They require difficult steps by political actors, involving negotiations and give-and-take. They ultimately require a comprehensive implementation of all aspects of Security Council Resolution 2254, he said.

"We must remain focused on achieving a comprehensive political resolution to the conflict, in line with Resolution 2254, respecting the sovereignty, unity, independence and territorial integrity of Syria, and enabling the Syrian people to realize their legitimate aspirations," said Pedersen.