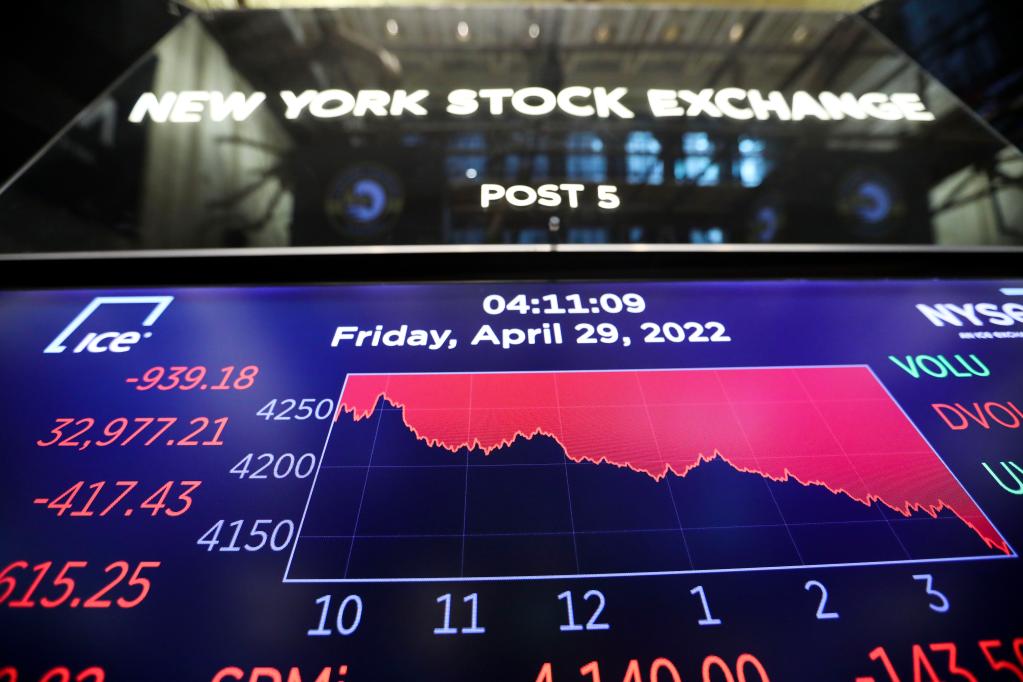 -"We're gonna have a recession," said Hufbauer, a former U.S. Treasury official. "And the only question is when the recession really starts."

-"Don't freak out about the GDP report, the underlying inertial components were strong," Jason Furman, former chairman of the White House Council of Economic Advisers, tweeted.

Friday marked the end of a super volatile U.S. trading week. Some experts and analysts maintain that topsy-turvy markets are a sign of bad economic times ahead, while others believe the future is bright.

Some analysts chalked up the market's reaction to the possibility that the news could cause the U.S. Federal Reserve to hike interest rates less aggressively, in its efforts to control the highest inflation in 40 years.

Paul Reilly, CEO of Raymond James Financial, chalked up the negative first quarter report to supply chain bottlenecks impacting U.S. sales, imports being up and exports being down.

"If those were more normalized, we would have had positive GDP," he said, as quoted in Yahoo Finance.

Noting that interest rates are important to go up to fight inflation, Reilly said, "The problem is we should have started sooner and we'll have to do it quicker, which is going to create some disruption."

Desmond Lachman, a resident fellow at the American Enterprise Institute, told Xinhua the stock market's 12 percent decline since the start of the year has been a reflection of the Fed's shift to a more hawkish monetary policy stance.

Markets are beginning to anticipate that the stock market will decline as the Fed starts an interest rate hiking cycle, and also starting to fear that the Fed will not succeed in squeezing inflation out of the economy without triggering a recession, Lachman said.

Gary Hufbauer, nonresident senior fellow at the Peterson Institute for International Economics, told Xinhua that there's no historical experience that suggests with such high inflation, the Federal Reserve is able to bring inflation down to its 2-percent goal without a recession.

"We're gonna have a recession," said Hufbauer, a former U.S. Treasury official. "And the only question is when the recession really starts."

"Now we had this result for this quarter, most people are saying that next quarter will be positive, so you won't have two (negative) quarters in a row," Hufbauer said. "But I think by the end of this year, say in the fourth quarter of 2022 in the first quarter of 2023, a recession is very likely."

However, other economists expect different trends.

Bernard Baumohl, chief global economist at The Economic Outlook Group, told Xinhua, "I'm not at all concerned about the U.S. having a recession this point."

The negative GDP quarter was due to factors including net imports being more than exports, which caused a rise in the U.S. trade deficit and subtracted from U.S. growth, said Baumohl.

In his view, Americans are spending the collective trillions of U.S. dollars they saved during the pandemic, as travel is surging back and people have returned to shopping malls, bars and restaurants. That spending has contributed to a U.S. trade deficit.

"The underlying fact is this - Americans are spending, businesses are investing," although companies are not able to invest in inventories as much due in part to lingering supply chain issues, Baumohl said.

"Don't freak out about the GDP report, the underlying inertial components were strong," Jason Furman, former chairman of the White House Council of Economic Advisers, tweeted on Thursday.

As for the Fed, the institution must navigate a complex road ahead.

"It's a hellishly complicated matter for the Fed. They want to bring inflation down, but they also realize that we had negative GDP growth. Therefore, they're likely going to be a little bit more cautious in their decision as to when and how much to raise short-term rates," Baumohl said.

"You don't want to hit the brakes too hard when the car's already slowing down," he said.