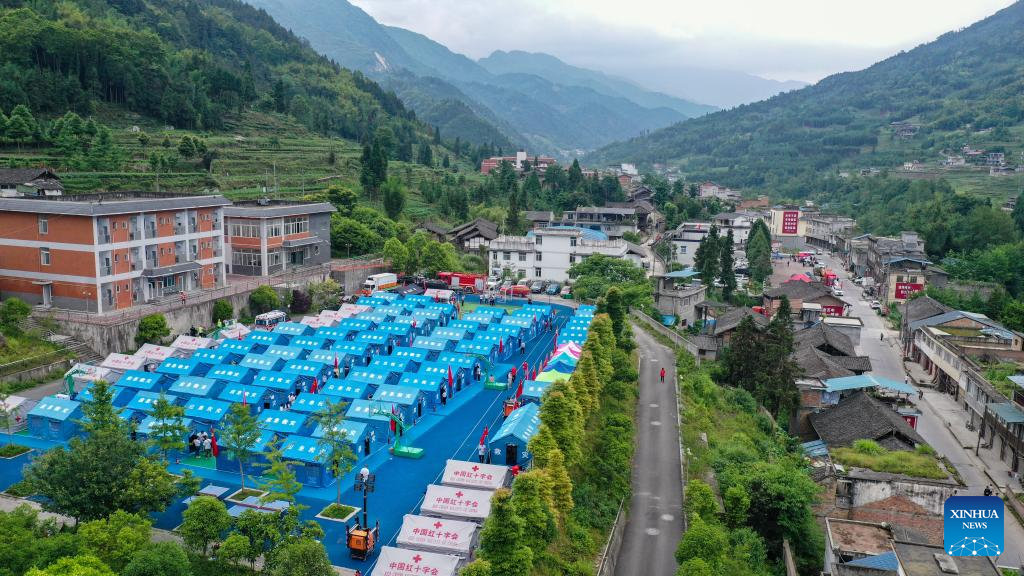 Four people have been confirmed dead and 41 others injured after a 6.1-magnitude earthquake jolted the city of Ya'an in southwest China's Sichuan Province on Wednesday afternoon, according to the city's earthquake relief headquarters on Thursday. Rescue operations are being carried out in an orderly manner. (Xinhua/Wang Xi)

People affected by an earthquake that on Wednesday rattled the city of Ya'an, southwest China's Sichuan Province, have begun to return to their normal lives after comprehensive rescue efforts.

Four people have been confirmed dead and 41 others injured after a 6.1-magnitude earthquake jolted Lushan County in Ya'an at 5 p.m. on Wednesday.

The earthquake was followed by a 4.5-magnitude quake at 5:03 p.m. in Baoxing County, also in Ya'an.

As of 9 a.m. Thursday, 34 casualties have been reported in Baoxing County and 11 injuries in Lushan County, the city's earthquake relief headquarters told a press briefing.

Those injured have been sent to hospital for treatment. One is in critical condition, two who were seriously injured are now in stable conditions, and the 38 who suffered minor injuries are in no immediate danger.

A total of 13,081 people in the city have been affected by the earthquake, the relief headquarters said. Three county highways, a section of a national highway, and telecommunication in some parts of the affected areas were cut off. A total of 135 houses were severely damaged.

"I was picking tea leaves on the mountain when I felt the tremor. I would have fallen down if I hadn't grasped the tree," said Yang Jinmei, a resident of Shengli Village, Lushan County.

Yang's husband and two children are working or studying outside of the village. Fortunately, the 51-year-old was quickly sent to a safe site, guided by village officials after the earthquake.

Gong Bing, deputy mayor of Ya'an, said that more than 12,700 residents have been relocated to 61 sites that were urgently set up in the counties of Lushan and Baoxing on Wednesday night.

"We have sent 400 tents, 2,000 quilts and 400 tent lights to the earthquake-struck areas. Grain, oil, vegetables, clothing, medicines and other materials have been transported to those sites to ensure the supply of basic living materials," Gong said.

More than 4,600 people from emergency rescue teams, the armed police, the fire department, the medical sector and other areas have been dispatched to the earthquake-struck areas to search for and rescue people who have been injured, and to repair roads and relocate affected residents.

As the annual national college entrance examination known as the "Gaokao" will take place in just a few days, local high school seniors are preparing with the help of teachers in temporary classrooms despite the impact of the earthquake.

"The improvement of the quality of buildings after a 7.0-magnitude earthquake in Lushan in 2013 was the most important reason why there was not a large number of casualties caused by collapsed buildings this time," said Wang Tun, director of the Institute of Care-Life, an organization that studies earthquakes in Chengdu, the capital of Sichuan, and local emergency management authorities.