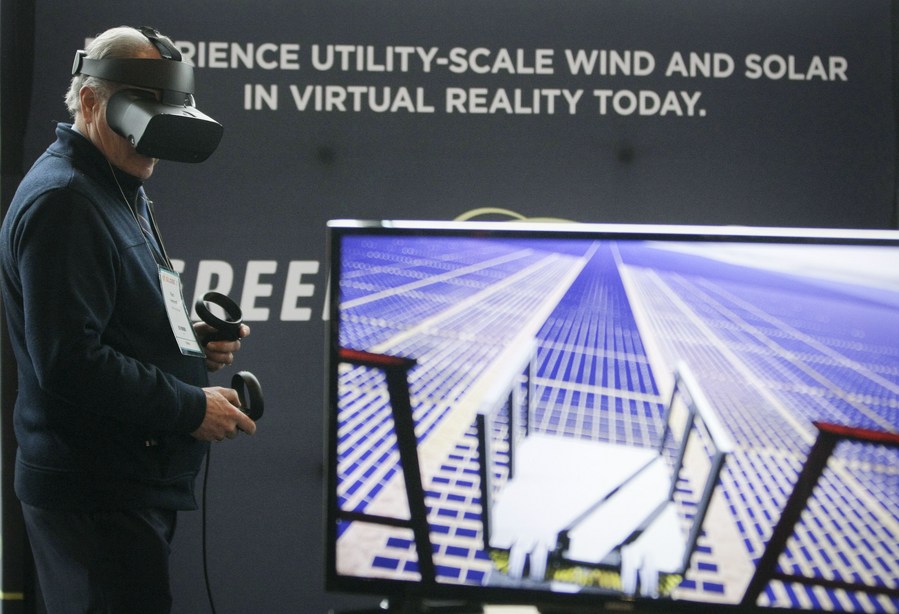 A delegate looks at a large-scale wind and solar plant through virtual reality (VR) experience during the Globe Expo 2020 at Vancouver Convention and Exhibition Centre in Vancouver, Canada, Feb. 11, 2020. (Photo by Liang Sen/Xinhua)

Canadian Minister of Environment and Climate Change Steven Guilbeault on Wednesday announced the publication of the final Clean Fuel Regulations (CFR) that focus on emissions throughout the lifecycle of fuels.

"The Clean Fuel Regulations help secure a foundation for more growth in the industries that will help Canada achieve net-zero emissions while continuing Canada's role as a global supplier of energy," Guilbeault said in a news release.

The regulations set increasingly stringent requirements on producers and importers to reduce the carbon intensity of gasoline and diesel, the news release said. Once fully implemented, the CFR will help cut up to 26.6 million tonnes of greenhouse gas pollution in 2030, or roughly the amount of greenhouse gases currently generated by the entire Canadian economy in two weeks.

The oil and gas sector is Canada's largest source of greenhouse gas emissions. In 2020, it produced 27 percent of national emissions.

The CFR, replacing the current federal Renewable Fuels Regulations, will create incentives for the increased domestic production of low-carbon-intensity fuels (such as ethanol). This will create economic opportunities for biofuel feedstock providers, such as farmers and foresters. It will also help Canadian fuel producers to compete in the rapidly expanding global market for clean energy, the release said.

According to the release, the regulations have been designed to ensure there will be no immediate impact on fuel prices and they come at a time when refining margins on gasoline in Canada are up more than 113 percent between June 2019 and June 2022, and oil and gas companies are experiencing record cash flows.

It is an opportune time for industry to invest in new, clean technology, the release said.