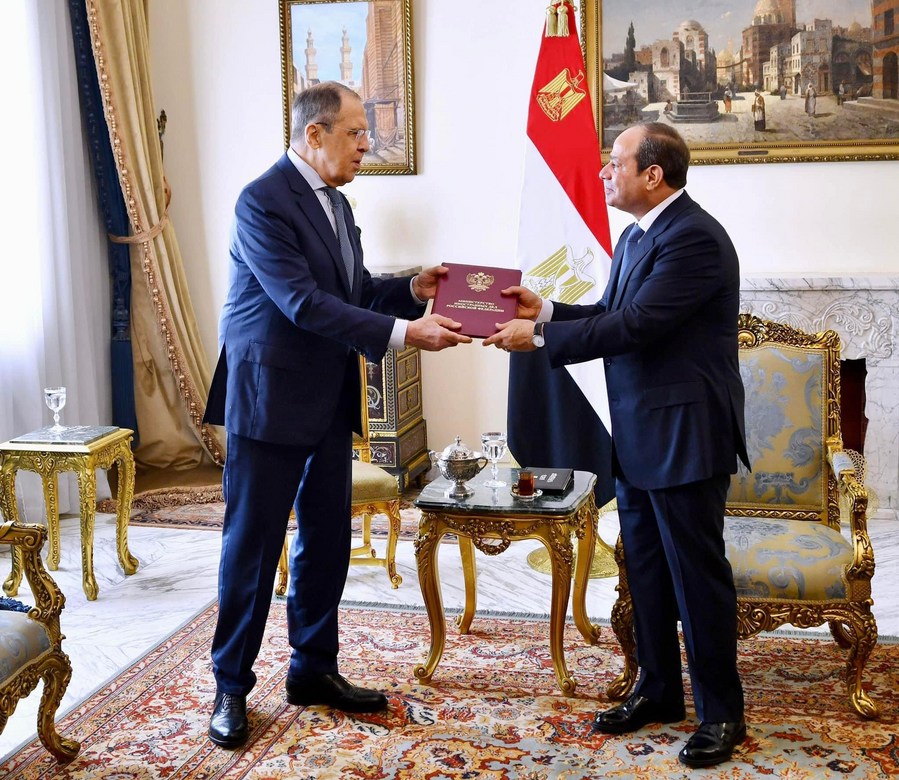 Lavrov handed to Sisi a letter from Russian President Vladimir Putin, expressing the importance Russia attaches to consolidating bilateral ties with Egypt within the framework of the "strategic partnership and cooperation agreement between the two countries," the Egyptian presidency said in a statement.

The Egyptian president hailed the growing cooperation between Cairo and Moscow, which is exemplified by Russian projects in Egypt, such as the El-Dabaa nuclear power plant that is currently being built, and the establishment of a Russian industrial zone on the Suez Canal axis and other joint projects in various fields.

With regard to the ongoing Russian-Ukrainian conflict, Egypt renewed its call for a political settlement of the crisis.

Sisi stressed "the importance of giving priority to the language of dialogue and diplomatic solutions to the crisis," affirming Egypt's support for all endeavors that would settle the issue "politically" in order to maintain international security and stability.

It is Lavrov's first African tour since the beginning of the Russian-Ukrainian conflict that started in late February. The tour is scheduled to include Ethiopia, Uganda and the Democratic Republic of the Congo. 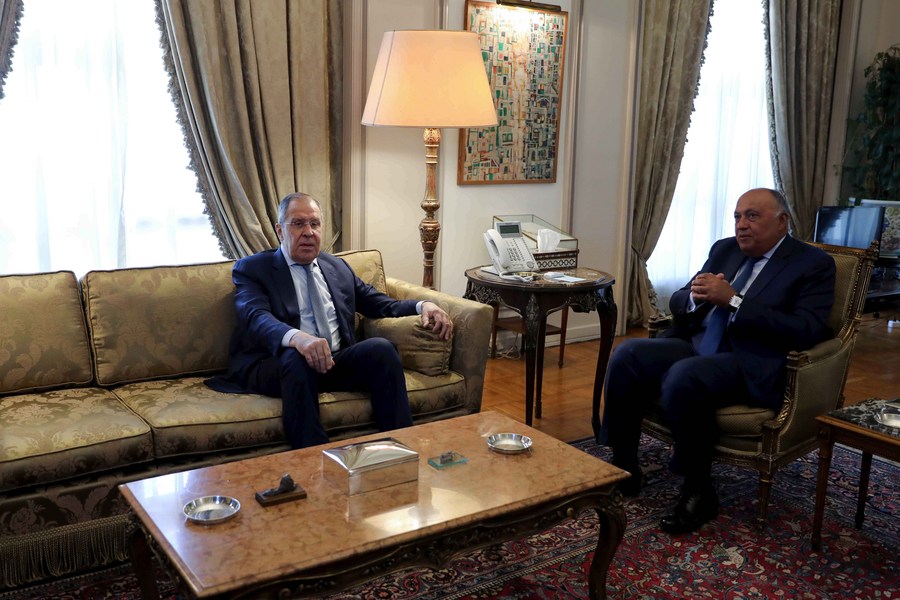 Following his talks with Sisi, Lavrov held a meeting with his Egyptian counterpart Sameh Shoukry at the Egyptian Foreign Ministry's headquarters in Cairo.

The Russian top diplomat said he had "a constructive dialogue" with the Egyptian president and later with his Egyptian counterpart, expressing Russia's appreciation for the fast-growing relations between the two countries.

Speaking to a joint press conference after meeting with Shoukry, Lavrov lauded the expanding economic cooperation and growing trade volume between Russia and Egypt.

He added that Russia and Egypt have shared views on many regional and global issues, including the Palestinian-Israeli conflict and the crises in Syria, Libya and Iraq.

As for a global food shortage resulting from the Russian-Ukrainian conflict, Lavrov blamed the Western sanctions for obstructing Russian grain exports, noting that Russia and Ukraine recently signed an agreement to help relieve the food crisis through safe corridors in the Black Sea for grain exports.

Lavrov noted that his tour in Africa also seeks to discuss preparations for the second Russia-Africa summit that is scheduled for mid-2023.

For his part, the Egyptian foreign minister reiterated the need to reach "a political and diplomatic settlement" of the Russian-Ukrainian crisis.

Shoukry added that he discussed with Lavrov the Palestinian-Israeli conflict and they both agreed on the necessity of the two-state solution as a settlement to the issue.

Ahmed Kandil, head of the International Studies Unit at Cairo-based Al-Ahram Center for Political and Strategic Studies, said that the timing of Lavrov's tour in Africa is very important as it comes after two recent important meetings, one in Jeddah attended by leaders of the United States and the Gulf Cooperation Council (GCC) member states, plus Egypt, Jordan and Iraq, and the other in Tehran gathering leaders of Russia, Iran and Türkiye.

"Lavrov's scheduled visit to Ethiopia after Egypt could be a message from Moscow that Russia can play an important role in solving the region's issues, the foremost of which is the Grand Ethiopian Renaissance Dam (GERD) crisis," the Egyptian expert told Xinhua, referring to the dispute between Cairo and Addis Ababa on the rules of filling and operating the dam built on their shared Nile River.

Lavrov is scheduled to visit the Cairo-based headquarters of the Arab League (AL) later in the day to meet with AL Secretary-General Ahmed Aboul-Gheit and address the permanent representatives of Arab states at the league.