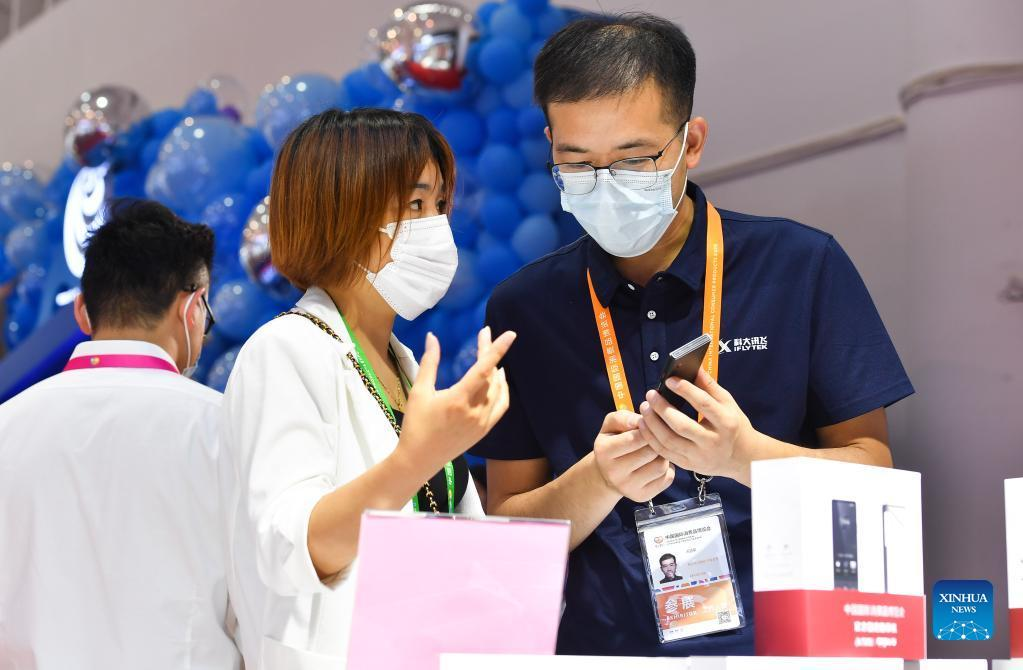 A visitor learns about the translator from an exhibitor at the booth of IFLYTEK at the second China International Consumer Products Expo (CICPE) in Haikou, south China's Hainan Province, July 26, 2022. A batch of domestic brands have attracted a lot of visitors at the expo. (Xinhua/Yang Guanyu)

Visitors flocked to the Aroma Naturals booth at the second China International Consumer Products Expo (CICPE) to savor the unique fragrance of scented candles, offering a glimpse of the immense popularity of homegrown brands.

"We have made available a variety of aroma products that are appealing to domestic consumers at the expo. Previously, we mainly focused on the overseas market. Since 2020, however, we have been developing and building Chinese product lines," said Cindy Zhang, manager of the homegrown brand, Dalian Talent Gift Co., Ltd., the parent company of Aroma Naturals based in northeast China's Liaoning Province.

"We hope to tap into the domestic market through the expo," she added.

It was the second time that the brand participated in the expo held in Haikou, capital of south China's Hainan Province, showcasing 11 types of products made specifically for the domestic market.

"This year, we launched a peach-flavored gift box that contains a scented candle and an aroma diffuser," Cindy said. "We also incorporated ancient Chinese classic poems into the name of the gift box."

The six-day expo that kicked off on July 25 has attracted 1,107 overseas companies and 1,643 brands from 61 countries and regions, as well as over 1,200 domestic brands.

Aroma Naturals is just one of the many domestic brands attending this year's expo. Near the Aroma Naturals booth, several electric surfboards had attracted a large crowd.

"The latest surfboard model has a maximum speed of 40 km per hour, its maximum load is 100 kg and it can run for two hours," said an employee of the company headquartered in Shenzhen, a metropolis of the southern Guangdong Province.

At the Zhi-tech Group booth, a Beijing-based tech company focusing on the consumer industry, many people stopped by to admire the cups and potteries featuring traditional Chinese elements. High-tech products such as robotic floor cleaners and smart kitchen appliances also attracted large crowds.

"Our booth covers an area of 960 square meters, and over 30 brands are on display. We hope the CICPE can help more Chinese brands to enter the global market and enhance their brand image," said Ruby Sun, vice president of Zhi-Tech Group.

The number of homegrown products on the e-commerce platform Douyin skyrocketed by 508 percent in March 2022 from April last year, with 93 percent of the top-selling items on the platform being domestically produced.

"Homegrown enterprises should seize opportunities of the rapid upgrading of the domestic market to strengthen their brand image and develop more new products," Liu said.