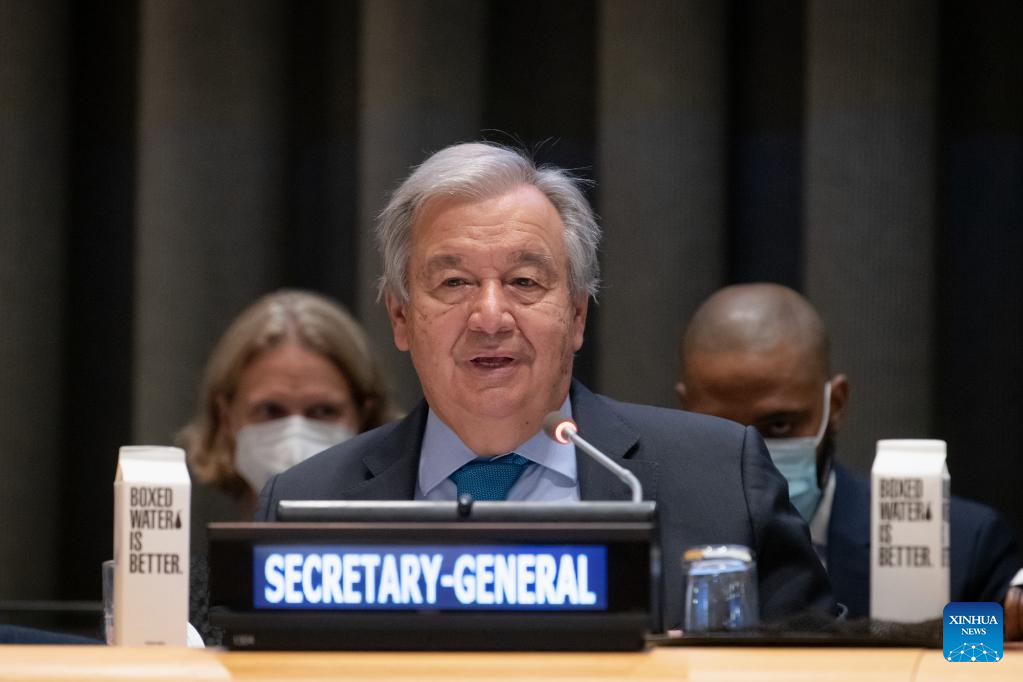 UN Secretary-General Antonio Guterres (C) speaks during a briefing to the General Assembly on the progress on Our Common Agenda at the UN headquarters in New York, on Aug. 4, 2022. Guterres on Thursday expressed the hope that the Summit of the Future scheduled for the General Assembly high-level week in September will produce a Pact for the Future. (Mark Garten/UN Photo/Handout via Xinhua)

UN Secretary-General Antonio Guterres on Thursday expressed the hope that the Summit of the Future scheduled for the General Assembly high-level week in September will produce a Pact for the Future.

The summit is a once-in-a-generation opportunity to reinvigorate global action, recommit to fundamental principles, and further develop the frameworks of multilateralism so they are fit for the future, he said in a briefing to the General Assembly on the progress on his Our Common Agenda.

The outcome of a successful Summit of the Future will be an inter-governmentally negotiated Pact for the Future, he said.

"At the heart of this pact should be a commitment to reinvigorate the multilateral system and make it fit for the challenges of today and tomorrow. It must reaffirm our fundamental belief in the Charter of the United Nations. And it should re-focus our efforts on meeting our existing commitments in the 2030 Agenda and the Paris Agreement; addressing threats to international peace and security; and realizing our ambitions on human rights, international justice, and gender equality," said Guterres.

"The Pact for the Future must demonstrate to the world that while we face daunting challenges, we can overcome them with cooperation, compromise and global solidarity. We must show that through an emphasis on our shared humanity and a strengthened multilateral system, we can put the world on a better path," he added.

It is almost a year since he presented the report on Our Common Agenda. During that period of time, the need for the proposals in the report has only increased, said Guterres.

In addition to the triple planetary crisis of climate breakdown, air pollution and biodiversity loss, and the immense suffering caused by the COVID-19 pandemic, conflicts are raging around the world. Developing countries are being squeezed dry. Without resources to invest in recovery from the pandemic and deal with the impact of the Ukraine conflict, the 2030 Agenda and the Sustainable Development Goals have been thrown further off course, he said.

The global economic forecast is perilous. Four countries have already defaulted on their debts; many others face the risk of default. Financing for development is drying up, or being diverted elsewhere. Meanwhile, overwhelming evidence of climate catastrophe is mounting by the day. Geopolitical competition has intensified. The risk of nuclear confrontation is now more acute than it has been in decades, he noted.

"Our Common Agenda was intended as a wake-up call. One year on, we must ask ourselves: have we woken up?" he said.

While the problems facing the world are unprecedented, they are not insurmountable, he said. "Our Common Agenda attempts to correct our course, guided by the United Nations Charter, to build the safer, more resilient and inclusive world set out in the 2030 Agenda and the Sustainable Development Goals."