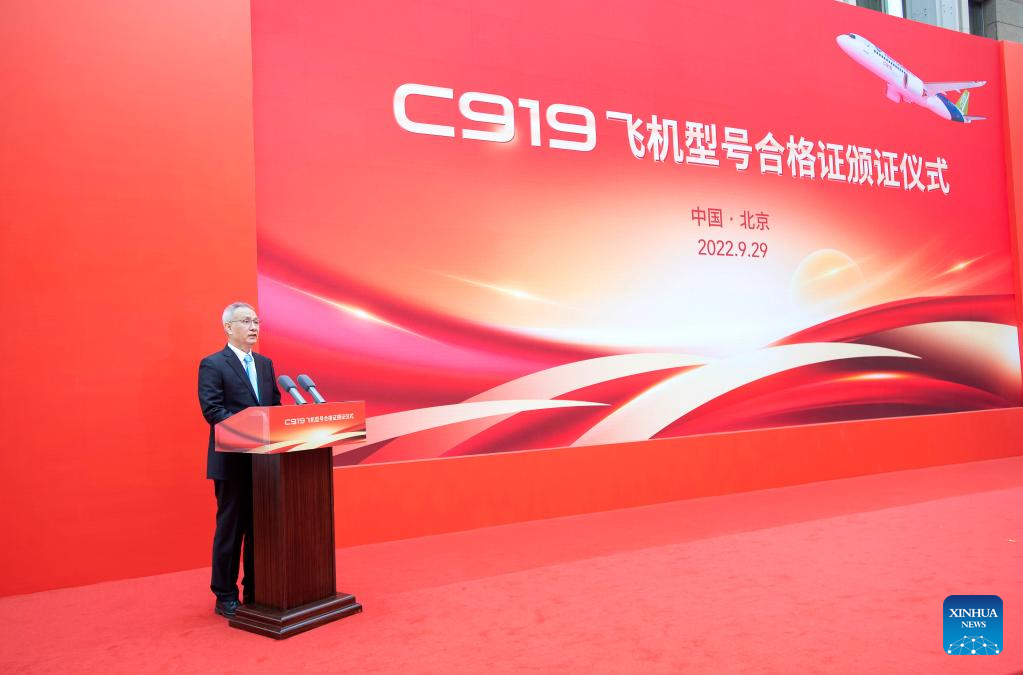 The C919, China's first homegrown large jetliner, has obtained the type certificate, a milestone step on its journey to market operation.

The Commercial Aircraft Corporation of China, the C919's developer, got the certificate from the Civil Aviation Administration of China (CAAC) on Thursday. It indicates that the C919's design meets airworthiness standards and environmental requirements.

"The type certificate approval means the C919 has the 'certificate of entry' into the civil aviation market," said Yang Zhenmei, a senior CAAC official in charge of airworthiness certification.

The C919 has to get another two certificates during airworthiness certification, the prerequisite step for civil aircraft entry into the market.

The plane conducted its successful maiden flight in 2017.

In the following five years, the C919 did six test flights in different locations to test the plane's capabilities.

The C919 has gone through tests in various types of extreme natural environments including high temperature, high humidity, severe cold, gusts and freeze. Its safety, reliability, and environmental protection performance have been comprehensively assessed, Yang said.

After completing airworthiness certification, a civil aircraft will need to go through product delivery and operation preparation before being put into commercial operation.

The C919 currently has 28 customers with orders totaling 815 planes.

The Communist Party of China (CPC) Central Committee and the State Council have extended congratulations on the certificate to all institutions and personnel involved in developing the C919.

Their congratulatory message was read out by State Councilor Wang Yong at the certificate conferring ceremony at the Beijing Capital International Airport Thursday.

It said that the certificate is a significant fruit of China's innovation-driven development, signaling a milestone in building China into a manufacturing powerhouse.

Vice Premier Liu He, also a member of the Political Bureau of the CPC Central Committee, attended the ceremony.

Regarding the certificate as a hard-won achievement, Liu called for efforts to promote the integration of industries, universities, and research institutes, stressing that the country's talent-first strategy must be upheld.

The country's massive domestic market needs to be well utilized, Liu said, adding that developing large jetliners is a long-term undertaking China must stick to.