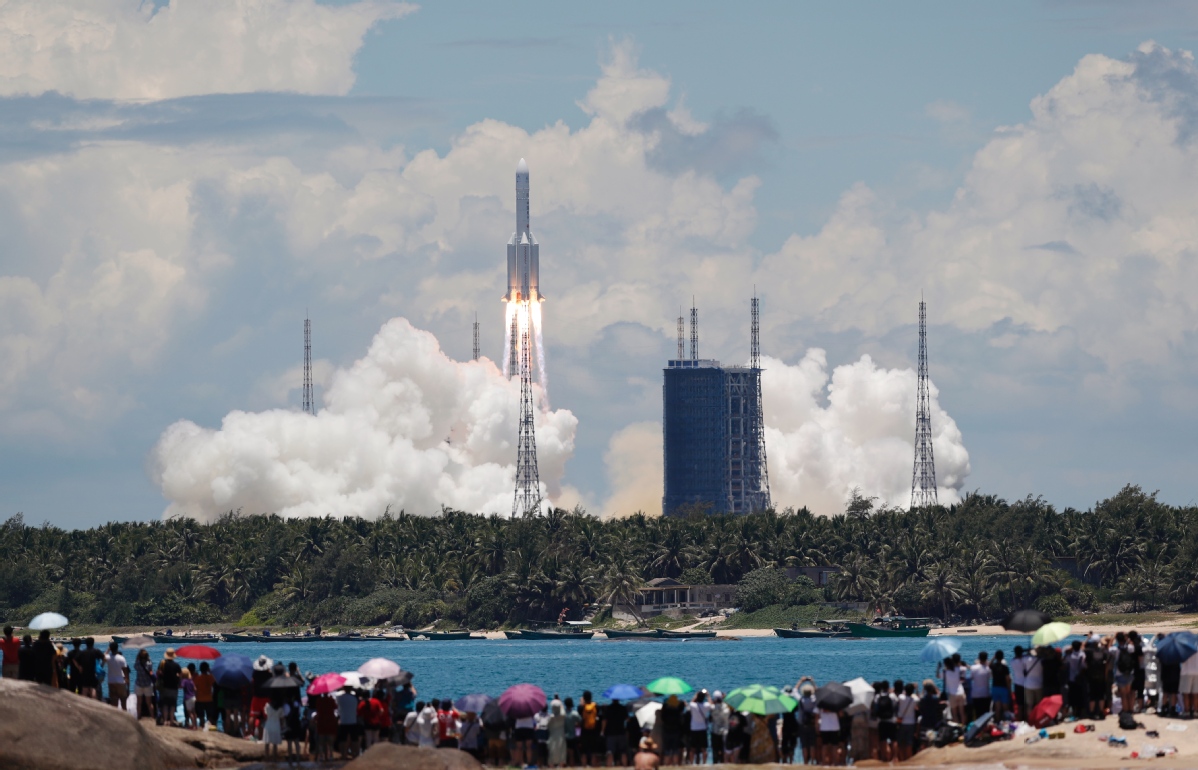 As the launch sequence started at 12:41 pm, 10 engines at the bottom of the Long March 5 carrier rocket's first core stage and four boosters roared to life, generating a massive combined thrust of more than 1,000 metric tons to lift the gigantic vehicle with the Tianwen 1 robotic probe on top into the bright blue sky dotted with a few white clouds from the coastal launch complex in Wenchang.

The 57-meter rocket, the strongest and most technologically sophisticated in China's launch vehicle family, flew about 36 minutes before placing the spacecraft into an Earth-Mars transfer trajectory. The flight set a record for the fastest flight speed of the country's rocket fleet as it surpassed the escape velocity, or 11.2 kilometers per second, a speed required to enable a spacecraft to break free from Earth's gravitational pull.

If everything goes according to schedule, the 5-ton Tianwen 1, which consists of two major parts－the orbiter and the landing capsule－will travel more than 400 million km over some seven months before entering the Martian gravitational field, according to the China National Space Administration.

Several midcourse and deep-space correction maneuvers will be made during the spaceflight to make sure the probe will be precisely aimed at the Red Planet.

After the probe enters Mars orbit, it will revolve around the planet for two and a half months to investigate the landing capsule's preset landing site before descending to a certain altitude to release the landing capsule, which will gradually fall through Mars' atmosphere.

As soon as the entry, descent and landing processes start, the capsule will first use a heat shield to decelerate, which means the craft will rely on aerodynamic drag to slow down. And then it will deploy a parachute to further reduce the speed and drop the heat shield. In the next step, the capsule will drop the parachute together with the back shell and ignite the retrorockets.

When the spacecraft reaches about 100 meters above the surface, it will suspend the descent and spend some time observing and analyzing the selected landing point to check for obstacles like rocks. With a positive result, the craft will continue descending until the last moment above the surface, when the retrorockets will be shut down and the capsule will touch down on Martian soil. If, however, the landing site looks unsuitable, the spacecraft will make slight adjustments to touch down on a suitable adjacent site.

The landing has been scheduled to take place around May in the southern part of Mars' Utopia Planitia, a large plain within Utopia, the largest known impact basin on Mars and in the solar system, the administration said.

The entire landing operation is expected to take about 7 minutes, which experts are calling "the riskiest moment" of a Mars landing mission.

After a certain period of preparations, the lander will unlock the rover to allow it to move onto the Martian surface.

Weighing about 240 kilograms, the rover, which has yet to be named, has six wheels and four solar panels and is able to move 200 meters per hour on Mars. It carries six scientific instruments, including a multispectral camera, ground-penetrating radar and meteorological measurer, and is expected to work about three months on the planet. If the highly autonomous machine functions well, it will become mankind's fifth rover deployed on Mars, following its four predecessors from the United States.

According to Sun Zezhou, chief designer of the probe, a rover will need to overcome an array of difficulties on Mars such as disturbed reception of sunlight and extreme weather to survive and operate.

He said the Chinese rover has been programmed to enter dormancy under extreme circumstances and then reactivate itself.

Up in the Martian skies, the orbiter will continue circling the Red Planet for mapping and measurement tasks with seven scientific instruments, including a high-resolution imager and magnetometer. It will also relay signals between the ground control and the rover, the administration said.

Liu Tongjie, deputy head of the space administration's Lunar Exploration and Space Programs Center, said that a Mars mission is characterized by plenty of uncertainties and risks. China became capable of planning and realizing such a sophisticated mission after increasing its engineering capabilities and know-how through the successful implementation of the Chang'e lunar exploration programs.

"We have done many tests and experiments to verify our plans and equipment. We have also prepared a vast ground-based network for deep-space tracking and remote control," Liu said, adding that his engineers have produced many emergency-response plans to handle unexpected scenarios.

If Tianwen 1 fulfills all of its three objectives－orbiting Mars for comprehensive observation, landing on the planet's surface and deploying its rover to conduct scientific operations, "it will become the world's first Mars expedition accomplishing all three goals with one probe," said Ye Peijian, a leading scientist in deep-space exploration at the China Academy of Space Technology.

One of the four terrestrial planets and the most similar to Earth in the solar system, Mars is the most favorable destination for mankind to engage in deep-space exploration. It also fires the imagination－among all scientific topics, humans seem to be most enthusiastic about searching for life and an eventual attempt at interplanetary immigration.

Research on the Red Planet is also meaningful to studying the history and evolution of Earth, space scientists said.

Before Tianwen 1, there had been 45 Mars exploration missions since October 1960, when the then-Soviet Union launched the world's first Mars-bound spacecraft. Only 17 of them have been considered successful.

The most recent such mission before Tianwen 1 is the Emirates Mars Mission, the fourth space program of the United Arab Emirates and the first interplanetary mission by the Arab world. It launched the Hope orbiter on Sunday atop a Japanese rocket from the Tanegashima Space Center in Japan.

Depending on the two planets' orbits, Mars is between 55 million km and 400 million km from Earth.

The most fuel-efficient launch windows for a Martian expedition occur at intervals of approximately 26 months, and this is why previous attempts from different spacefaring parties usually took place during a similar time frame.

Currently, there are six Mars orbiters in active service and two operational rovers on Mars.

The history of the Chinese people's observation of Mars can be traced to more than 3,000 years ago, with ancient astronomers calling the celestial body Yinghuo, or Perplexing Fire, because in their eyes, the planet looked like a capricious, shimmering flame in the night sky.

In August 2010, eight distinguished Chinese scientists submitted a suggestion to the government that the country should considering the feasibility of deep-space exploration beyond Earth's moon.

In January 2016, the planetary exploration program was approved by the government and was assigned to the China National Space Administration.

Major parties involved in the Tianwen 1 mission include China Aerospace Science and Technology Co, a State-owned space conglomerate that designed and built the rocket and spacecraft; the Chinese Academy of Sciences, responsible for the ground-based scientific applications network; and the China Satellite Launch, Tracking and Control System, which handles launching, controlling and tracking the probe.

International cooperation also is a factor in this mission, involving collaboration between the Chinese space administration, the European Space Agency and Argentina's space authority in terms of mission tracking as well as joint efforts on scientific payloads with French and Austrian space researchers.

Liu said scientific data and findings by Tianwen 1 will be shared with the international science and space communities.

Norbert Paluch, science counselor at the French embassy in China, who was invited to witness the mission's launch, said on Wednesday in Haikou, Hainan's capital, that Tianwen 1 will be significant in both science and technology and the mission will improve humans' knowledge of Mars.

"Everybody on Earth will learn a lot about what China will discover on Mars," he said.

Tianwen, or Quest for Heavenly Truth, is a long poem by famous ancient poet Qu Yuan of the Kingdom of Chu during the Warring States Period (475-221 BC). He is known for his patriotism and contributions to classical poetry and verses, especially through the poems of the Chu Ci anthology, also known as Songs of Chu.

Naming the mission after the poem was intended to show China's determination to explore deep space and to implant the love of science in young people, the space administration said.

In the second step in China's Mars exploration program, a larger probe will be sent to Mars around 2030 to take samples and return to Earth, officials said. China also has a longterm goal of sending humans to the Mars, the country's manned-space authorities announced last year.