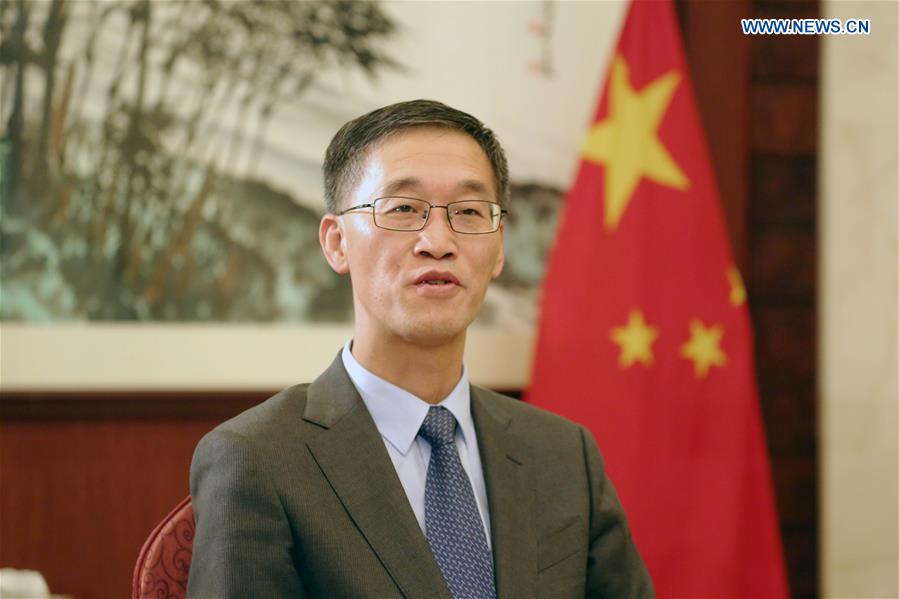 Chinese Ambassador to Pakistan Yao Jing speaks during an interview with Xinhua in Islamabad, Pakistan on May 23, 2019. China and Pakistan will join hands in building a closer community of shared future in the new era against the backdrop of changing international landscapes, Chinese Ambassador Yao Jing said. (Xinhua/Ahmad Kamal)

China and Pakistan will join hands in building a closer community of shared future in the new era against the backdrop of changing international landscapes, Chinese Ambassador Yao Jing said.

"The Closer China-Pakistan Community of Shared Future in the New Era is a concrete measure taken by leaders of the two countries as per the concept of building a new type of international relations and a community of a shared future for all mankind," Yao told Xinhua in a recent interview.

A China-Pakistan joint statement in this regard was released in November last year when Pakistani Prime Minister Imran Khan made his first visit to China.

The closer community of shared future in the new era is based on mutual trust, friendship and amity, as well as shared interests and political consensus reached between the two countries and two peoples on the Belt and Road Initiative and the China-Pakistan Economic Corridor (CPEC), the ambassador said.

CPEC has brought about drastic changes to Pakistan's socio-economic development over the past five years. During Prime Minister Khan's another visit to China in April, the two countries signed a deal on the first industrial park and future industrial cooperation.

As part of the international cooperation under the Belt and Road Initiative, CPEC should be instrumental to regional cooperation, interconnectivity and common development, the Chinese envoy pointed out.

A third party will be invited to participate in the next phase development of CPEC, he added.

The first meeting of the CPEC International Cooperation Coordination Working Group was held in Beijing in April to build CPEC as a platform for regional cooperation, development and prosperity.

Fostering people-to-people's bonds always remained as a priority of the Belt and Road cooperation between China and Pakistan, according to Yao.

"The China-donated Faqeer Primary School in Gwadar has become one of the best local schools, where students have increased to nearly 500 from 150 over the past five years," he said.

"China also helped build a medical center in Gwadar which has provided health services for the local people," the ambassador added, noting that vocational training institutes were set up in Quetta and Lahore to help address youth employment in Pakistan.

In recent years, civic groups, training schools and local institutions across the country have been seeking exchanges and cooperation with China in education, culture and sports, Yao said.

"The Belt and Road Initiative has yielded such appealing results that the Pakistani people have been getting increasingly enthusiastic about participating in the Chinese projects and agreeing with the Chinese concepts," he added.

With regard to the China-Pakistan relations, Yao said that a new era has been ushered in and a new prospect is just around the corner. "There will be plenty of opportunities for both countries."