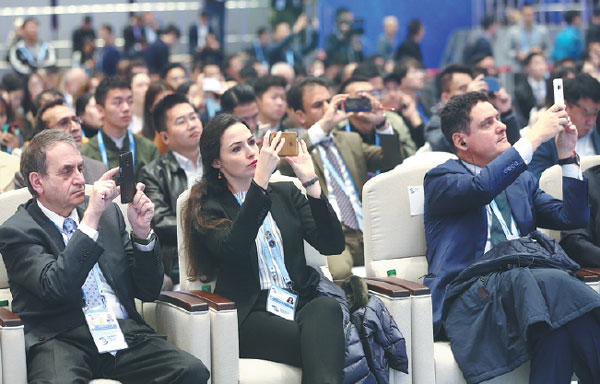 Foreign participants take photos of the closing ceremony at the Fifth World Internet Conference, an annual event that has helped many internet-based companies in China and abroad over the last four years to clinch cooperation agreements in fields like fintech. Zou Hong / China Daily

Internet-based technology is allowing more customers' financial needs to be met, thanks to niche software and collaboration agreements, said experts and CEOs at a sub-forum of the Fifth World Internet Conference on Thursday.

Observers predicted the fintech sector's recent growth will continue, as more tech firms have been cooperating with financial companies and institutions across the country.

Speaking at the forum, Zhang Xiaoyan, vice-president of the National Institute of Financial Research at Tsinghua University, noted how a number of internet companies in China and other developing countries have scored big achievements in recent years, because with the aid of financial technologies, they managed to satisfy consumers' demands, previously underserved by traditional financial institutions.

"We hope they (internet financial companies) will continue to move along the road of financial inclusion," Zhang said.

Fan Yifei, vice-governor of the People's Bank of China, the central bank, also said at the forum: "The development of fintech should be oriented to meet consumers' growing demand for better life. Serving the real economy is the primary task of fintech."

Throughout China, some of the country's biggest technology firms are stepping up their collaboration across the economy.

"Today our bigger vision is collaboration and integration, and we are making our technologies open to more institutions," said Qi Yuan, vice-president and chief data scientist at Ant Financial Services Group at Thursday's forum.

One example of how Ant Financial is opening up its AI technologies is its agreement with CFPA Microfinance Management Co Ltd, a Chinese micro-finance company which focuses on rural areas. The deal allows for a wider application of the technology, which could improve both companies' risk control capacities for digital lending, said Qi.

Ant Financial has also signed agreements with 10 regional financial regulatory bodies. By sharing its technologies, the company says it can help authorities to identify and resolve risks as early as possible.

Yasushi Sasaki, senior partner and managing director of the Boston Consulting Group, said during the conference that Ant Financial's innovation in technology sharing will become "mainstream", as economies adopt collaboration as a way to boost economic development.

On top of internet giants such as Ant Financial, many emerging fintech companies have seen the value of cooperation, albeit with a focus on more niche markets. Among them is the FinUp Fintech Group, a Chinese internet financial services provider established in 2013.

Dong Qi, co-founder and CEO of the company, told China Daily during the conference that the fintech industry regularly sees institutions collaborating as a way to complement advantages, achieve higher efficiency, and offer better services for customers.

Dong said his company has been working with traditional financial institutions to equip them with advanced technologies to better serve customers' financial needs in some niche but important areas, such as medical cosmetics and car loans, where the company has developed advantages.

Looking ahead, Dong predicted technology-driven development is here to stay. "In general, the trend of technologies empowering China's financial system will not change," he said.

The CEO added he expects to see more fintech companies collaborating with other institutions, such as banks, in the future.