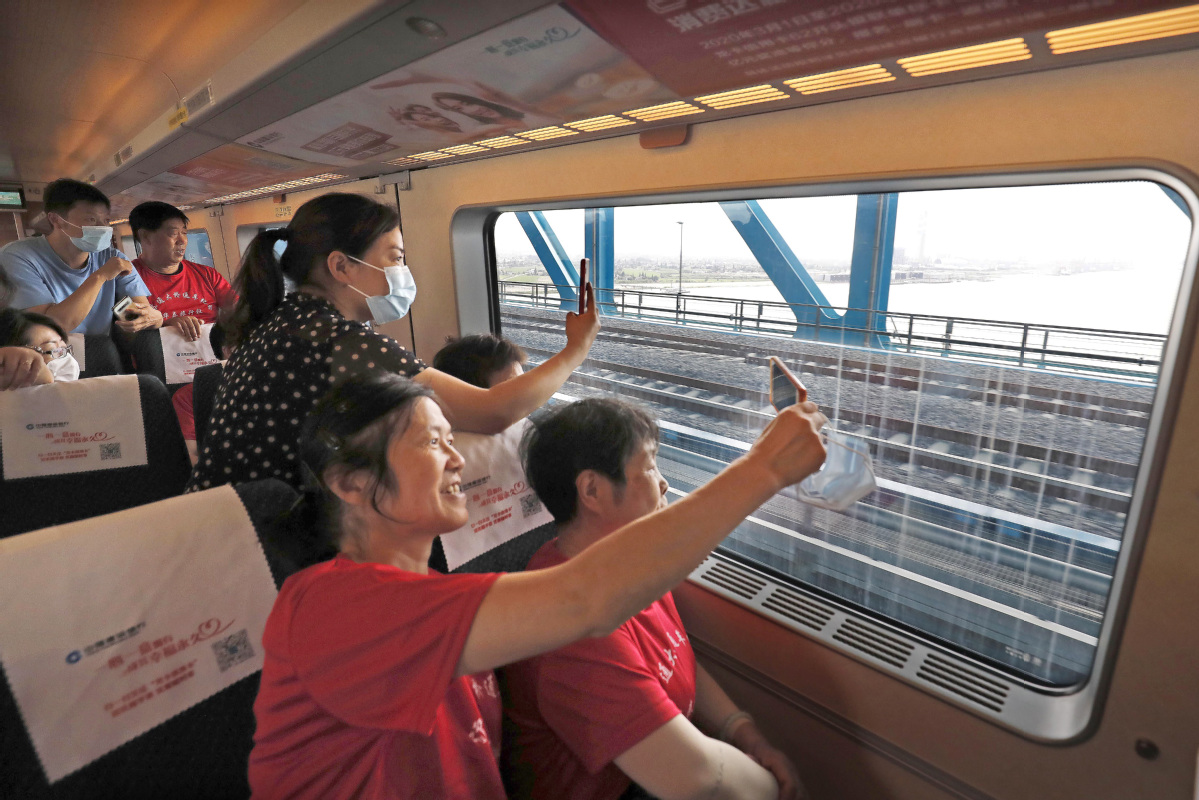 A grand bridge over the Yangtze River serving cars and trains began operations on Wednesday in Nantong, Jiangsu province, and is expected to greatly promote the integration of the Yangtze River Delta and bolster the economy of one of China's most developed regions, the country's top transport authorities said.

The Shanghai-Suzhou-Nantong Yangtze River Bridge stretches 11,072 meters, with a single span of 1,092 meters. It took six years and four months to build between Nantong and Zhangjiagang, a county-level city of Suzhou city, Jiangsu province.

Wang Feng, deputy chief engineer of China Railway Corporation, said that many new technologies were used in the cable-stayed bridge, including an advanced anti-collision system and cables with the highest tensile strength in the world.

"The anti-collision system can warn the river traffic authority within 3 kilometers if a ship appears likely to strike a bridge pier," he said.

With a designed speed of 200 km/h, the new railway lane will cut travel time between Nantong and Shanghai from 3.5 hours to just over an hour.

Commuters between Nantong and Shanghai no longer have to go to Nanjing to transfer.

A maximum of 44.5 pairs of passenger trains and six pairs of freight trains will be launched every day.

From Nantong, the 143-km railway enters Shanghai through Zhangjiagang, Changshu and Taicang in Jiangsu's Suzhou city.

The three county-level cities have been included in the country's railway network since the opening of the railway.

Pan Guoqiang, Party secretary of Zhangjiagang, said that the Shanghai-Suzhou-Nantong Railway will not only greatly improve the traffic efficiency of the city, but also accelerate its process of integrating with the rapid development of the Yangtze River Delta.

"The traffic between Zhangjiagang and Shanghai will be shortened from the previous two hours by highway to the current 30 minutes by railway," Pan said.

"The city will establish a traffic network consisting of highways, railways and ports. The Zhangjiagang Port, one of the largest international trade ports along the Yangtze, has opened up more than 40 container routes and carried out trade with more than 320 ports in over 90 countries."

Jiangsu province currently has six railways under construction. More than 180 billion yuan ($25.5 billion) will be invested to construct the 1,021 km of railways, according to the Jiangsu Transport Bureau.

Ding Congrong in Nantong contributed to this story.