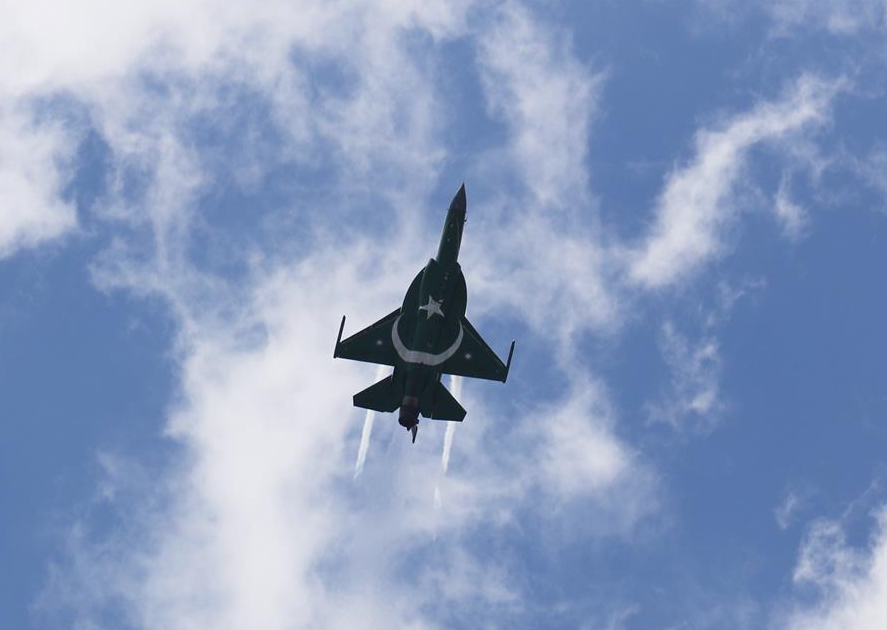 A JF-17 Thunder from the Pakistan Air Force performs during a flight display at the 53rd International Paris Air Show held at Le Bourget Airport near Paris, France, June 17, 2019. The JF-17 Thunder was jointly developed by China and Pakistan.

China-Pakistan friendship is well known in the international relations and quoted as role model. It is based on equality, mutual respect, supporting each other, complimenting each other, non-intervention into each other's domestic affairs, and principles of civilization and UN. Although, our relations are wide scope and strategic. It covers all aspects, including diplomacy, foreign policy, political defense, economic, technical, culture etc.

February this year, India found an excuse for “Pulwama Incident” for aggression on Pakistan. Just within hours, of the incident, which costed lives of 40 soldiers in Occupied Kashmir in India, India based on Pakistan and threat Pakistan, blamed Pakistan and coerced Pakistan. Instead of focusing on investigations and collection of evidence, India unilaterally opted for aggression. It was not the first time in Indo-Pak relations, but in the past, it happened on many occasions, where India, used domestic issues to blame Pakistan and threatened with the use of force or full-scale war.

On 26 February 2019, the Indian Air Force, intruded Pakistan's aerospace and dropped bombs in barren land inside Pakistan. But Pakistan Airforce, immediately chased them to leave the Pakistani Territory. The next day on 27 February, in response to Indian aggression, Pakistan air force, targeted 6 high-value targets, while staying inside Pakistani territory. But deliberately missed the targets and keeping a safe distance, fired missiles. Indian radars confirmed that their high-value targets were locked accurately and were sure, no one can save them. But, Pakistan, being a responsible state, observed constraints and averted the escalation of full-scale war. The objective of the Pakistan air force was to convey India a message that, Pakistan's capabilities are there, but we are peace loving nation and do not opt for war. Our ambitions are to promote “Peace”.

Pakistan Air Force used JF-17 Thunders in this exercise and successfully maintained supremacy over India. JF-17 is a joint venture between China and Pakistan and the symbol of our traditional friendship. Due to its outstanding performance, JF-17 become a popular fighter jet in the world. Many other countries have shown a keen interest in JF-17.

Recently held International Air show in Paris, France, where all other leading fighter planes were displayed and offered performance, JF-17 attracted attention from many nations. As JF-17 is a multi-role fighter jet, can meet the requirement of many countries. Its performance is outstanding, but cost effective yet.

It is always important to participate in regional and global events and the successes achieved during the Paris show have vindicated this point of view. The wonderful performance by JF-17 demonstrated to the world that the multi-role aircraft was as efficient as any other aircraft produced by famous companies and countries that are considered to be big names in the international defense market. In view of the fact that JF-17 is an advanced, lightweight, all weather, day and night fighter jet, prospective buyers from around the world took a keen interest in the aircraft and there are reports that the country has received a good number of orders from different customers. This is not without reason as the aircraft jointly developed with the cooperation of our all-weather friend China demonstrated its fighting capabilities during the recent standoff with India. India propagated that Pakistan used F-16 in the encounter that resulted in shooting down of an Indian jet, the fact remains that it was JF-17 that encountered the enemy’s planes and taught them a lesson. It was because of the wonderful performance by the JF-17 that it got total recognition in defense circles and the fighter jet is now compared favorably against all famous aircraft.

The credit for this achievement, of course, goes to PAF engineers and technicians, who worked hard to improve and upgrade the aircraft over the years and made it a name to be reckoned with.

Pakistan has attained the indigenous capacity to design, manufacture and export to the rest of the world. With this achievement, Pakistan has joined the elite club of fighter-jet manufacturer of the world. It is desired that the Government may prioritize this sector and provide all the necessary resources. This capacity may be enhanced more and fully exploited for national interests. It may also contribute to the economic development of the nation. Pakistan possesses the potential to excel in a certain area, Government may provide policy farm-work necessary for the boosting of such areas.

Aerospace Industry is a high-tech based complex industry and can move forward many other allied industries. May generate jobs for youth and make the nations self-dependence in defense as well as on economic fronts.