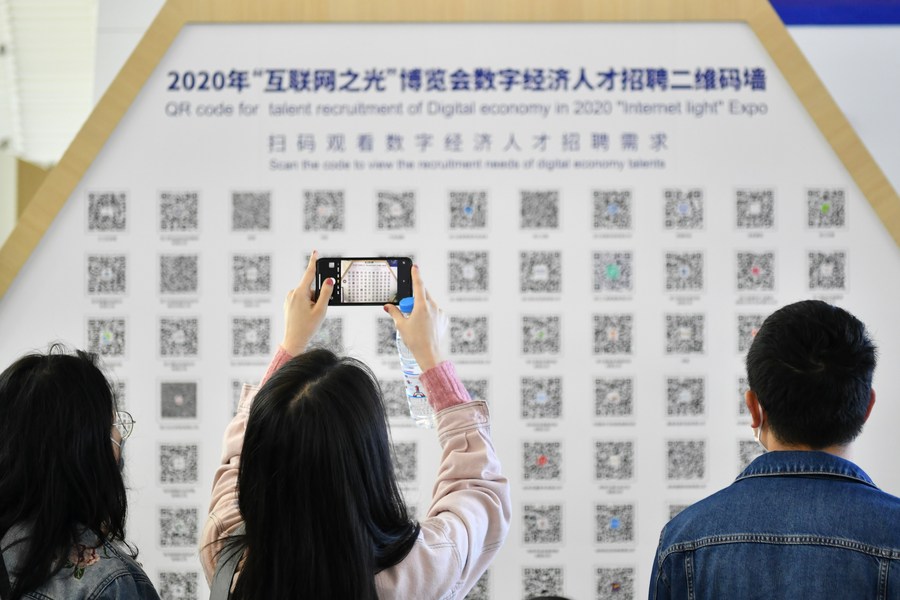 A visitor scans the QR code to learn about recruitment needs of digital economy talents during the Light of Internet Expo of the 2020 World Internet Conference (WIC) in Wuzhen, east China's Zhejiang Province, Nov. 22, 2020. (Xinhua/Li Xin)

China's digital economy reached 35.8 trillion yuan (5.45 trillion U.S. dollars) in 2019, accounting for 36.2 percent of the country's total GDP, according to a report released by the Chinese Academy of Cyberspace Studies.

Unveiled at the World Internet Conference -- Internet Development Forum, which opened Monday in Wuzhen, in east China's Zhejiang Province, the report said the raging COVID-19 pandemic has underscored the importance of the Internet, while the digital economy has become an important force in mitigating the impact of the virus, reshaping the economy and improving governance capability.

By the end of May, China's fiber-optic network had covered all urban and rural areas, with the number of fiber-optic subscribers accounting for 93.1 percent of the country's fixed broadband users, the highest in the world, according to the report.

In 2019, there were 5.44 million 4G base stations in China, and the consumption of mobile-data traffic reached 122 billion GB, ranking first in the world. As of September this year, China had built more than 480,000 5G base stations.