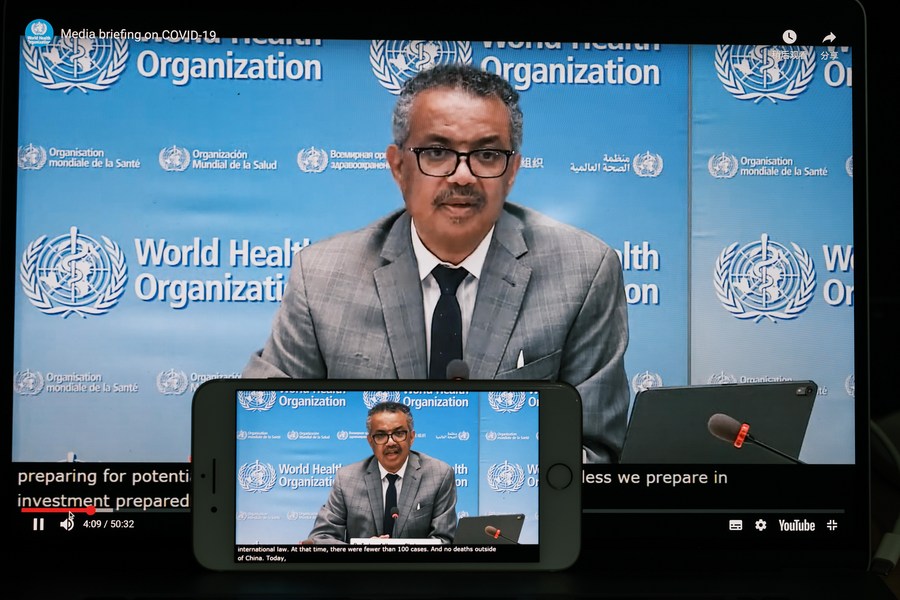 "Numbers can make us numb to what they represent: every death is someone's parent, someone's partner, someone's child, someone's friend," Tedros said, and called for vaccination of health workers and older people to be underway in all countries within the first 100 days of 2021.

The number of COVID-19 cases worldwide is expected to reach 100 million within this week, said the Director-General of the World Health Organization (WHO) Tedros Adhanom Ghebreyesus.

"A year ago today, fewer than 1,500 cases of COVID-19 had been reported to WHO, including just 23 cases outside China. This week, we expect to reach 100 million reported cases," Tedros said at a WHO press briefing on Monday.

"Numbers can make us numb to what they represent: every death is someone's parent, someone's partner, someone's child, someone's friend," he added, and called for vaccination of health workers and older people to be underway in all countries within the first 100 days of 2021.

He also quoted two latest reports to show that without equitable access to COVID-19 vaccines, the world would have to face not only a catastrophic moral failure, but also an economic failure.

According to a new report from the International Labor Organization, which analyzes the impact of the pandemic on the global labor market, some 8.8 percent of global working hours were lost in 2020, resulting in a decline in global labor income equivalent to 3.7 trillion U.S. dollars.

The report projects that most countries will recover in the second half of 2021, depending on vaccination rollout, and recommends international support for the vaccine rollout in low- and middle-income countries and to promote economic and employment recovery.

The second report, commissioned by the International Chamber of Commerce Research Foundation, finds that vaccine nationalism could cost the global economy up to 9.2 trillion dollars, almost half of which, about 4.5 trillion, would be incurred in the wealthiest economies.

In contrast, the financing gap for the Access to COVID-19 Tools Accelerator, a WHO-led initiative, is 26 billion dollars this year, according to Tedros, who added that the ACT Accelerator, if fully funded, would return up to 166 dollars for every dollar invested.

"Vaccine nationalism might serve short-term political goals. But it's in every nation's own medium and long-term economic interest to support vaccine equity," he said.