As a most populous FTA, it has boosted regional economic connectivity as multilateral trade triumphs. Dongxing, a border city in southern China, offers a snapshot of promising cooperation between China and ASEAN in the next golden decade.

At 8 o'clock in the morning, the Wanzhong International Wholesale Market in the border city of Dongxing was buzzing with merchants from China and Vietnam haggling amid endless arrays of goods from neighboring countries.

The scene at the market, a beneficiary of the China-ASEAN Free Trade Area (FTA) established 10 years ago, is expected to extend well into the next decade. 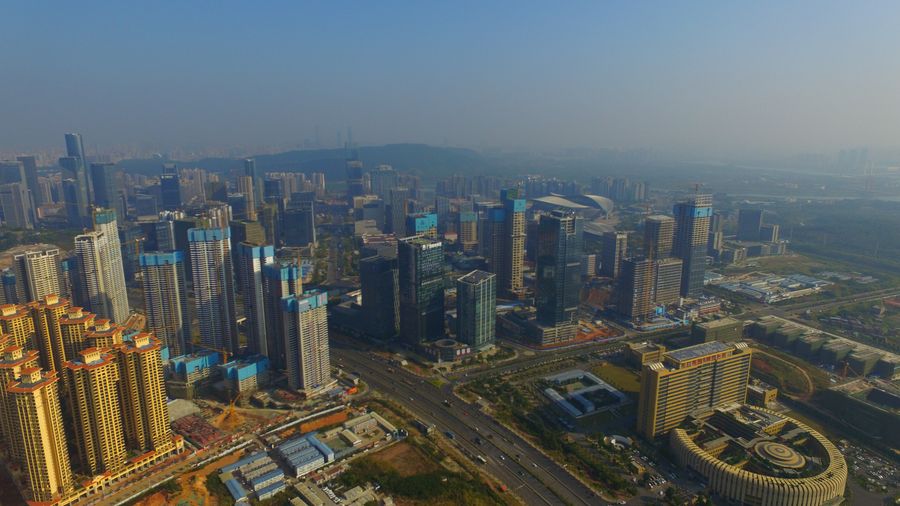 Dongxing, a city in south China's Guangxi Zhuang Autonomous Region, sits on the opposite bank of a river to Vietnam's Mong Cai, and the proximity has made it a trading hub for locals on both sides.

It takes Nguyen Thu Hoai, a 28-year-old Vietnamese merchant, only about 20 minutes to reach her specialty store in the Wanzhong market from her home in Vietnam.

Her shop has stood in Dongxing for two years. She earns about 5,000 yuan (715.69 U.S. dollars) to 6,000 yuan per month from selling Vietnamese specialties, about four to five times what she made in Vietnam as a mobile-phone reseller at her last job.

"Many Vietnamese had concerns about opening stores in a different country before, but after we made it here, more Vietnamese came," Nguyen said.

Yang Baoyun, professor of ASEAN studies at Thailand's Thammasat University, said that the last decade of the China-ASEAN FTA saw bilateral trade and investment surge forward along a fast route, during which China has made outstanding contributions to regional development. 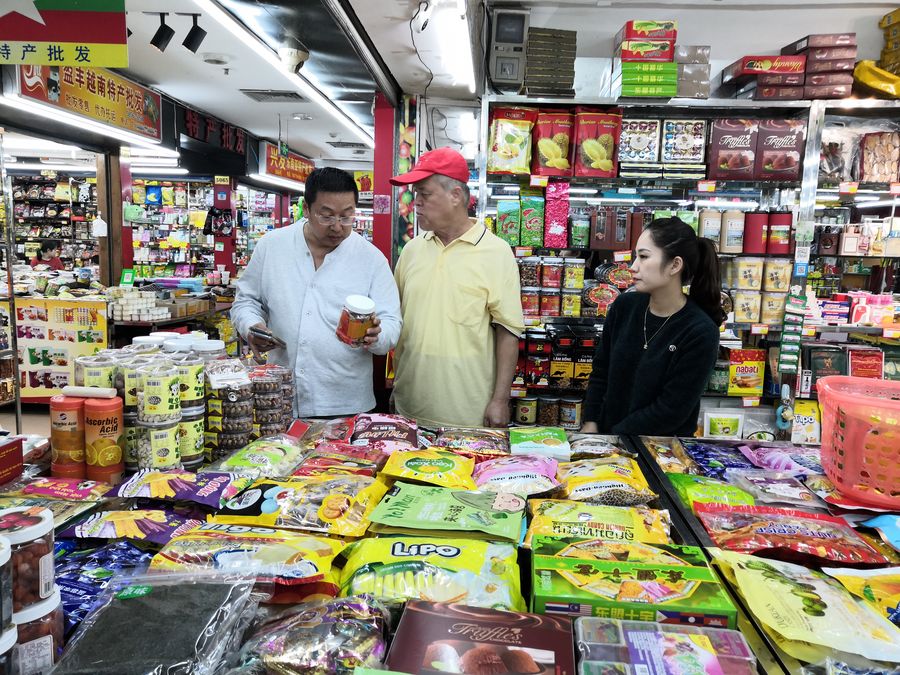 Dongxing-based Anbaoda Vietnam Logistics Company, set up in 2002 when China and ASEAN were in trade talks, saw goods expand in scale and varieties after the FTA area was established.

"At first, the goods from Vietnam were mainly small amounts of cassava flour, seafood and some other farm produce. To save costs, they were transported by small trolleys," said Yin Gang, general manager of the company.

When the FTA was set up, tariffs were slashed and the variety of goods expanded. Nowadays, it is common to see more than 100 truckloads of goods ranging from farm produce to electronic products transported between the two countries every month, Yin noted.

China has been ASEAN's largest trade partner since 2010. The region became the second-largest trading partner of China during the first half of 2019 when the volume almost surpassed the annual record of 2010, and the year-end figure in 2019 is expected to reach 600 billion U.S. dollars.

Ponchai Wala, a durian grower in Thailand, sells 85 percent of the durians he grows to China. In the past decade, he has expanded the scale of his operations five to six times over, with annual sales surging from 10,000 dollars to about 150,000 dollars.

"In Thailand, thousands of fruit growers have benefited just like me, the Chinese market has helped improve local employment," he said. 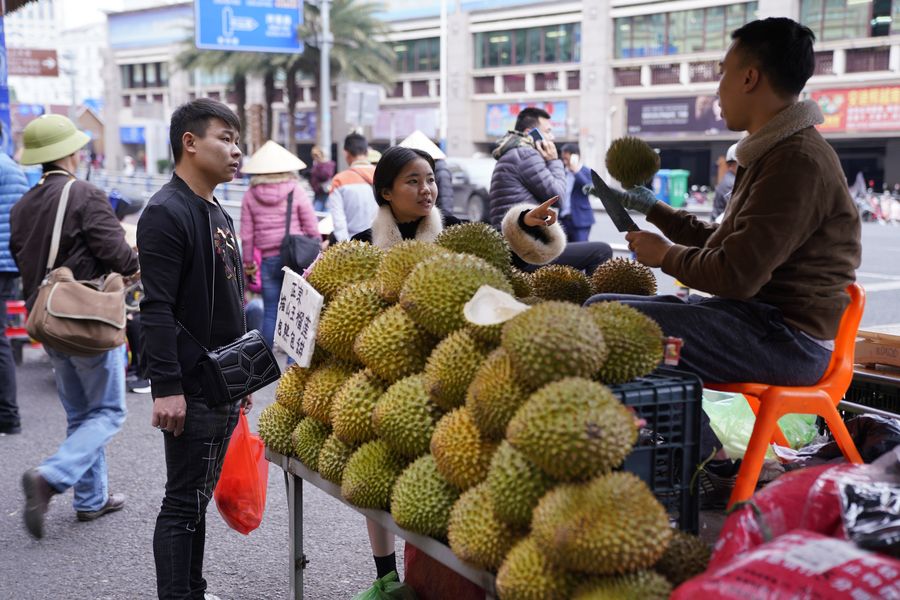 On Oct. 22, the protocol on upgrading the China-ASEAN Free Trade Area came into effect. The two sides are committed to pushing forward a more balanced and innovative FTA with greater synergy and broader cooperation in new fields such as the digital economy, e-commerce, smart cities and 5G.

Nguyen, the shop owner, is among those who have already been reaping the rewards from China's booming e-commerce. "Now I sell more online than in my brick-and-mortar stores," she said.

Nguyen noted that an increasing number of Chinese merchants had made investments in her hometown as well, thanks to the business convenience facilitated by the China-ASEAN FTA, the biggest FTA among developing countries.

More than 6,000 local workers were employed as the base was put into operation. It also attracted dozens of auto parts companies from China and abroad to Indonesia. The vehicles made in the base have been exported to Thailand since September, said Chen Weidong, a deputy general manager of the firm.

Chinese investment is booming in other ASEAN countries too. The China-Laos railway, once constructed, will bridge the inland southern country with its neighbor. In Indonesia, Chinese investors inked 400 manufacturing projects, among which China's CRRC Corporation Ltd. helped the country in building its first "railroad factory."

Statistics show that, as of August 2019, China and ASEAN have about 230 billion U.S. dollars of mutual investments. A total of 25 overseas economic and trade cooperation zones were set up by both sides, which have attracted more than 600 enterprises. 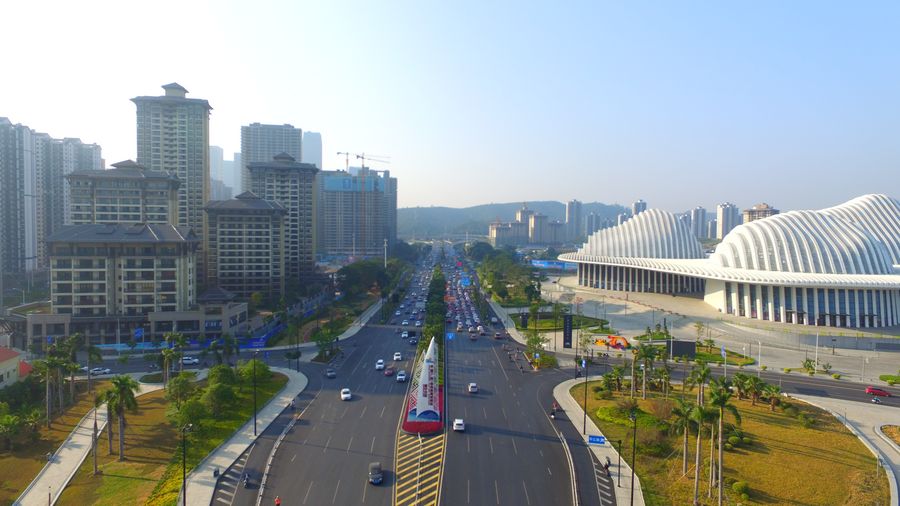 Zhou Fangyin, a researcher with the Guangdong Institute for International Strategies, said many ASEAN countries are still in the early stages of industrialization and have a pressing need for capital, technologies and facilities.

"China has a solid industrial foundation, complete industrial chains and high-quality labor force after more than 40 years of rapid growth," said Zhou. "The mutual integration of China's industrial and value chain with the ASEAN countries is reciprocal."

Azlimi Zakaria, consul general of the Consulate General of Malaysia in Nanning, the capital of Guangxi, said the establishment of the China-ASEAN FTA aims to facilitate bilateral trade of all kinds.

The rich fruits achieved in the first golden decade have strongly demonstrated the increasingly close economic and trade relations between the two sides and testified to the vigor brought by multilateralism and free trade, Zakaria noted.

Though unilateralism and protectionism have impacted global economic growth and threatened the global industrial chain and supply chain, multilateral trade remains the general trend, according to Zhou.

"With the in-depth implementation of the Belt and Road Initiative, China is expected to further reinforce the diversified trade patterns including trade with ASEAN, spur the world economy and establish a closer community of common destiny," Zhou said. Enditem