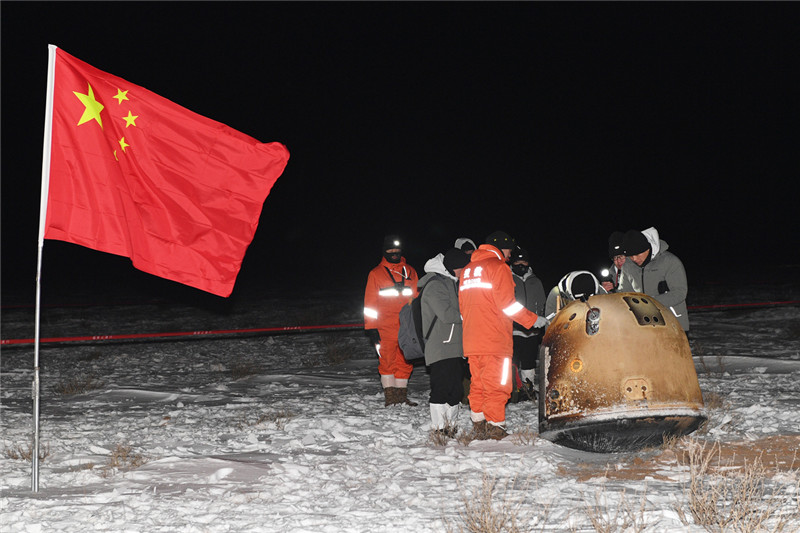 Technicians check the Chang'e 5 reentry capsule after it touched down at its preset landing site in Siziwang Banner of the Inner Mongolia autonomous region on Thursday. [Photo by Wang Jiangbo/For China Daily]

President extends congratulations to all participants in Chang'e 5 space program

President Xi Jinping sent a congratulatory message on Thursday on the success of the Chang'e 5 mission, China's most sophisticated and challenging space adventure, which has brought back the world's first lunar samples in more than 40 years.

On behalf of the Communist Party of China Central Committee, the State Council and the Central Military Commission, Xi extended warm congratulations and sincere greetings to all participants in the landmark mission.

Xi said the Chang'e 5 mission, China's most complicated space project, has achieved the Chinese space industry's first extraterrestrial sampling and returning. It is the latest achievement by China's system, which is characterized by its ability to mobilize all available resources to overcome difficulties and achieve its goals, and also marks a major step forward in the country's space industry, he said in the letter.

The mission's results will contribute to deepening mankind's understanding of the origin of the moon and the evolution of the solar system, he noted.

"Your extraordinary feats will be enshrined in the memory of our motherland and the people," Xi said in the letter, referring to those involved in the mission.

Noting that there is no end for space exploration, the president expressed his hope that the mission's workers carry forward the lunar exploration spirit in order to embark on interplanetary expeditions.

He encouraged them to continue to build the country into a major power in space, make new contributions to national rejuvenation, and give a stronger boost to the peaceful use of space and the building of a shared future for humanity.

China National Space Administration said in a statement that the reentry capsule touched down on its preset landing site in Siziwang Banner of the Inner Mongolia autonomous region at 1:59 am.

The capsule was transported by plane to Beijing on Thursday afternoon, where it will be opened by experts at the China Academy of Space Technology.

The reentry and landing processes started at around 1 am when mission controllers uploaded high-accuracy navigation data to the orbiter-reentry capsule combination that was traveling around Earth.

The capsule then separated from the orbiter about 5,000 kilometers above the southern Atlantic Ocean and began to descend toward Earth.

When the module was about 10 km above the ground, it released its parachutes and later smoothly landed on the snow-covered grassland. Recovery personnel sent from the Jiuquan Satellite Launch Center soon arrived at the landing site in helicopters and off-road vehicles.

The successful landing marked the completion of the historic 23-day Chang'e 5 expedition, the first in more than 40 years to bring lunar samples back to Earth, also making China the third country to achieve this feat, after the United States and the former Soviet Union.

Next, the sealed samples will be transferred to specially designed laboratories for analysis, experiments and tests.

A certain proportion of the samples will also be put on public display to enhance scientific awareness among the public, especially the younger generation, sources close to the mission said.

Chang'e 5, China's largest and most advanced lunar probe, consisted of four main components－an orbiter, lander, ascender and reentry capsule. The probe was launched by a Long March 5 heavy-lift carrier rocket early on Nov 24 at the Wenchang Space Launch Center in southern China's Hainan province, setting out on China's most difficult space mission and the world's first to retrieve lunar samples since 1976.

On Dec 1, the lander-ascender combination landed on the moon, becoming the world's third spacecraft to touch down on the lunar surface this century, after its predecessors－Chang'e 3 and 4.

The landing site was near Mons Ruemker, an isolated volcanic formation located in the Oceanus Procellarum, or the Ocean of Storms, on the western edge of the moon's near side. The area had never been visited before Chang'e 5.

Shortly after landing, the combination began to fulfill its major tasks of using a drill to obtain 500 grams of underground samples and then using a mechanical arm to scoop up 1.5 kg of surface soil.

The collection operations finished on Dec 2, taking about 19 hours, which was much quicker than expected. Samples were packed into a vacuum container inside the ascender.

During the process, the lander also unfurled the first free-standing Chinese national flag on the lunar surface.

The ascender activated an engine on Dec 3 to lift itself into an elliptical lunar orbit to prepare for docking with the reentry capsule, marking the first time a Chinese spacecraft has blasted off from an extraterrestrial body.

It linked up with the orbiting combination on Dec 6 and transferred the lunar samples into the reentry capsule. The ascender separated from the combination later that day and was commanded to impact on the moon on Dec 8.

The combination made two orbital maneuvers over the weekend after traveling in a near-circular lunar orbit for nearly six days. After the maneuvers, the pair entered a moon-Earth transfer trajectory on Sunday and began to fly back toward Earth.

According to the space administration, the Chang'e 5 mission was designated to fulfill several objectives. In terms of space engineering, it should demonstrate and verify technical plans and apparatus for autonomous lunar sampling and packing, moon-based launching as well as lunar orbital docking.

In the scientific context, it was tasked with investigating the landing site's geological and topographic features, and it enabled scientists to analyze lunar samples' structure and physical traits so they can deepen their research into the moon's origins and evolution.

The mission also aimed to help foster the country's knowledge, technology and talent pool for future manned lunar missions and other deep-space expeditions.

After the reentry capsule's landing was announced, Thomas Zurbuchen, associate administrator of NASA's Science Mission Directorate, wrote on social media: "Congratulations to China on today's return of lunar samples to Earth! The international science community celebrates your successful Chang'e 5 mission. These samples will help reveal secrets of our Earth-moon system and gain new insights about the history of our solar system."

The first man-made object from Earth to reach the moon was the Soviet spacecraft Luna 2. Instead of landing, it crashed into the moon in September 1959. The first lunar soft-landing was made in February 1966 by the Soviet Luna 9 spacecraft.

The Chinese government approved in January 2004 an overall plan for the country's lunar exploration program and officially launched the research and development work.

The first Chang'e probe was launched in October 2007. Since then, China has launched five lunar probes, including Chang'e 5, and one experimental spacecraft.

Before Chang'e 5, Chang'e 4, which remains operational on the moon, was the most remarkable lunar mission by China as it was the first endeavor by any nation to conduct surface observation of the moon's far side, which never faces Earth, thereby accomplishing a goal sought by scientists for decades.