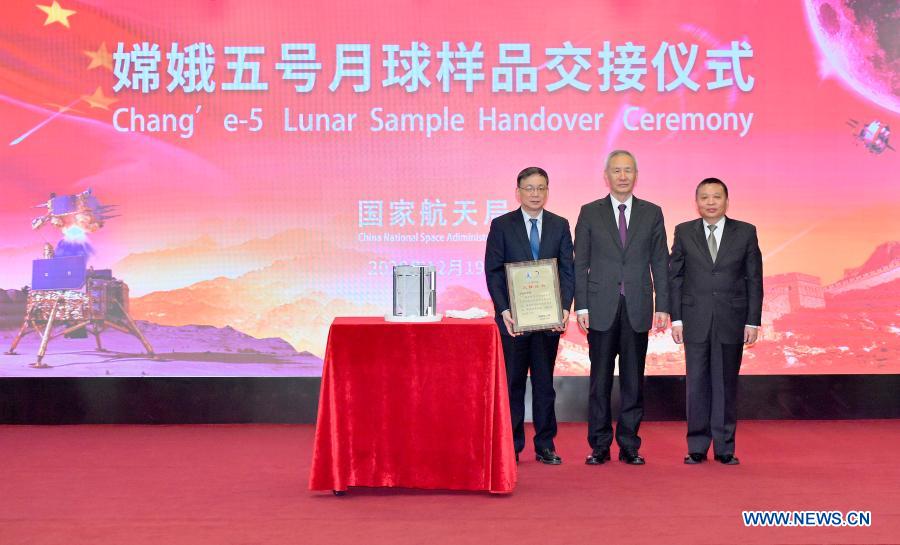 China's Chang'e-5 probe retrieved about 1,731 grams of samples from the moon, according to the China National Space Administration (CNSA).

At a ceremony on Saturday morning, Zhang Kejian, head of the CNSA, handed over the samples to Hou Jianguo, president of the Chinese Academy of Sciences (CAS).

Chinese Vice Premier Liu He, also a member of the Political Bureau of the Communist Party of China Central Committee, attended the ceremony. He hailed the Chang'e-5 lunar mission as an important milestone in building China's strength in aerospace.

Liu also asked to organize the collaboration and cooperation in tackling lunar sample research difficulties and contribute Chinese wisdom to deepening the scientific understanding of the universe's formation and evolution.

The samples were later transferred to the lunar sample lab at the National Astronomical Observatories under the CAS.

Scientists will carry out the storage, analysis, and research of the country's first samples collected from the extraterrestrial object.

The CNSA said it would release the relevant policies for the lunar samples retrieved by Chang'e-5 to coordinate and promote scientific research, encourage more scientists at home and abroad to participate, and strive to secure more scientific achievements.

The CNSA will also carry out public science popularization programs and cultural exchanges related to the mission.

Chang'e-5 is one of the most complicated and challenging missions in China's aerospace history. It is also the world's first moon-sample mission in more than 40 years.

The Chang'e-5 probe, comprising an orbiter, a lander, an ascender, and a returner, was launched on Nov. 24. The return capsule landed in Inner Mongolia Autonomous Region in the early hours of Thursday, bringing back the samples collected from the moon. Enditem