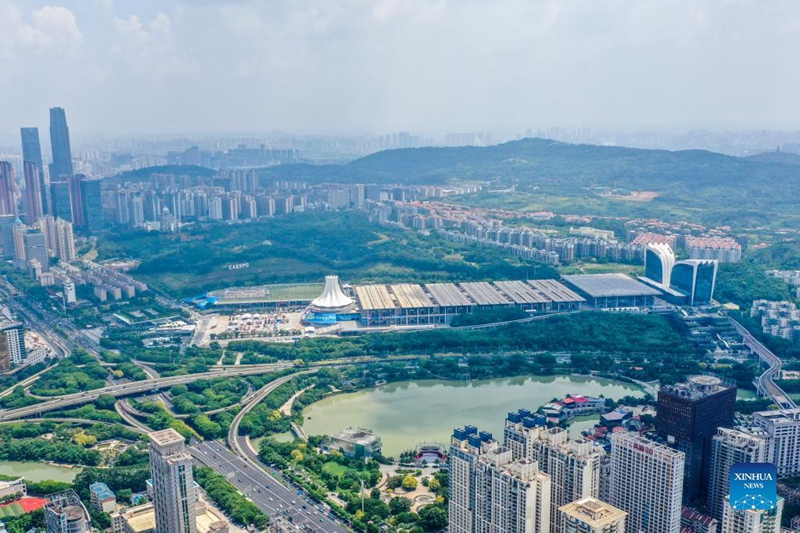 The 18th China-ASEAN Expo and China-ASEAN Business and Investment Summit kicked off Friday in Nanning, capital of south China's Guangxi Zhuang Autonomous Region, highlighting the building of a closer China-ASEAN community with a shared future.

Themed "Sharing opportunities created by the new land-sea corridor, building the China-ASEAN community with a shared future," this year's expo aims to deepen all-round cooperation in trade, economy, and other fields between China and ASEAN and consolidate the high-level dialogue platform.

With a total exhibition area of 102,000 square meters, the expo, held both online and offline, has attracted enterprises from more than 40 countries and regions.

The four-day expo will also host 26 high-level forums and 148 economic and trade promotion activities. A series of celebratory events will be held to mark the 30th anniversary of China-ASEAN dialogue relations.

Since China and ASEAN established dialogue relations in 1991, the two sides have remained committed to promoting regional development and prosperity with comprehensive cooperation and bringing tangible benefits to people in the region. The successes achieved in the past three decades were hailed by ASEAN leaders at the expo's opening ceremony.

Cambodian Prime Minister Samdech Techo Hun Sen said via video that the 18th China-ASEAN Expo bears testimony to the great success of China-ASEAN dialogue relations, which have "brought about development in all fields and prosperity for the nations and the people of ASEAN and China."

People-to-people exchanges between China and ASEAN have also strengthened, with personnel exchanges exceeding 65 million in 2019 before the COVID-19 pandemic. The two sides have exchanged over 200,000 students and formed more than 200 pairs of sister cities.

Secretary-General of ASEAN Dato Lim Jock Hoi, said via video at the opening ceremony the China-ASEAN dialogue relations have "evolved into a multifaceted strategic partnership and shown tremendous progress on all fronts."

"I look forward to continuing and further strengthening this relation through concrete, practical, and meaningful collaborations," he added.

Building on past successes to foster a closer community with a shared future was the common call of leaders and senior officials from China and ASEAN at the opening ceremony.

China is willing to work with ASEAN to align the Belt and Road Initiative with ASEAN countries' development strategies to jointly foster strategic partnership at a higher level, expand economic and trade cooperation, and promote regional connectivity and economic integration, to improve the well-being of the people, Wang said.

Malaysian Prime Minister Ismail Sabri Yaakob said in a video speech that China and ASEAN should further promote open trade and investment to facilitate the region's recovery from the impact of COVID-19.

"In the wake of the new wave of virus outbreak, we must work together, continue embracing rules-based and multilateral trade relations to facilitate the region in weathering the crisis," he said.

"China and ASEAN must continue working together in the fight against and overcoming the COVID-19 pandemic so as to sustain socio-economic activities and people's livelihoods," said Hun Sen, who also called for promoting China-ASEAN cooperation in all sectors, especially finance and trade, to facilitate the region's recovery from the pandemic.