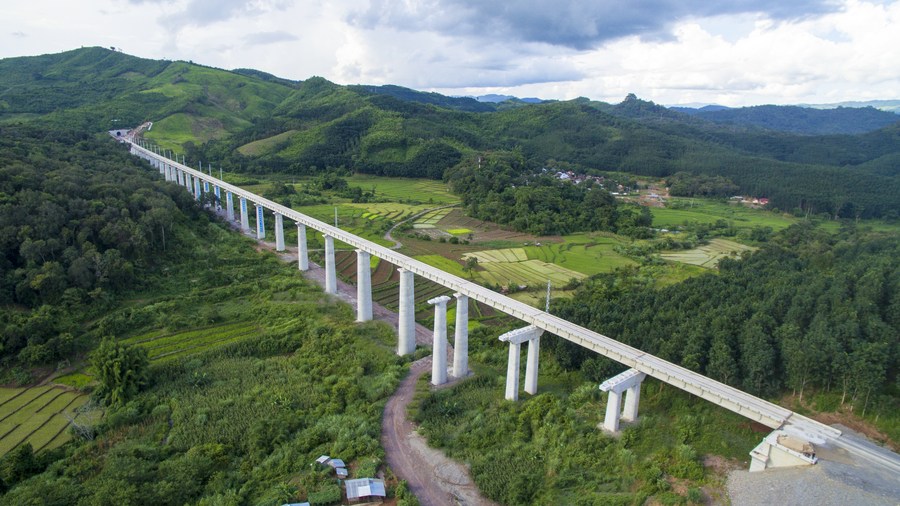 Aerial photo taken on July 29, 2020 shows the China-Laos railway over the villages and fields in northern Laos. (Photo by Pan Longzhu/Xinhua)

The world was a very different place five years ago when work began on the China-Laos railway. Much has changed since then, in almost every walk of life. But five years on, with completion of the railroad just weeks away, the natural environment along the route remains as verdant and lush as it was before the earthmovers arrived.

Years ago, during preliminary surveys, Huang Daiwen, a chief engineer of the China Railway No.2 Engineering Group (CREC-2)'s branch company on China-Laos Railway in Laos, was struck by the beauty of the landscape and resolved to do everything he could to ensure the cross-border project would exert the least possible environmental impact.

"After construction of every section, revegetation follows. This is not only high-quality engineering, but also common sense. We never spare any effort to return the trackside to the condition we found it in," Huang told reporters in Lao capital Vientiane recently.

Photo taken on July 28, 2020 shows the construction site of the China-Laos Railway near the villages and fields in northern Laos. (Photo by Pan Longzhu/Xinhua)

At the very beginning of the project, Huang's team struggled to build a temporary access road to the construction site of the Vientiane North Station, a struggle not made any easier by Huang's decision to bypass a piece of primary forest.

The team has not only made use of the technology at their disposal, but also had to adapt and come up with new technology of their own. Huang's CREC team in Laos has even applied for a patent for "roadbed slope revegetation devices".

Stranger in a strange land, Huang has relied heavily on the advice of local people. Ren Lijuan, one of the team's interpreters, who had visited local communities, brought back local seedlings, and showed the technical team how to transplant them. As a result, Huang asked her and a local woman named Kaikeo to form a "Blossom Team" to focus not only on the technicalities of revegetation, but also on the aesthetics.

"Flowers transplanted by Kaikeo out-blossomed all the others. She has great gifts, but also a more professional technique. We learned a lot from her and set her to training both Lao and Chinese staff. She did a great job," project executive manager Gong Pingchang told Xinhua.

Since the work began in 2016, environmental protection and engineering work have gone hand-in-hand. These are not simultaneous or sequential processes operating in tandem, but one unified procedure of design, construction and restoration, said Xiao Qianwen, executive manager of the Laos-China Railway Co., Ltd.

In the construction of the fifth section headquartered in Vang Vieng, a tourist town, it was important to protect not just flowers and trees, but the whole local tourism industry. The camp sewage system is inspected and maintained on a daily basis and the camp is kept garbage-free.

On the sixth section of the railway in capital city Vientiane, engineers have made good use of the experiences gained in the construction of the line between Hangzhou and Huangshan, two of China's premier tourist towns. Each station has been designed with plenty of space for all kinds of flora to ensure harmony between the greening of a new building and the local scenery.

"Chinese standards are ecological standards. A project like the China-Laos Railway must minimize disruption to the lives of people along the route, especially schools and medical facilities. We have worked hard to win the praise of local people and governments, and are very proud of what we have achieved together," said Xiao.

The railway, which will be put into operation in December 2021, is a docking project between China's Belt and Road Initiative and Laos' strategy to convert itself from a landlocked country to a land-linked hub.