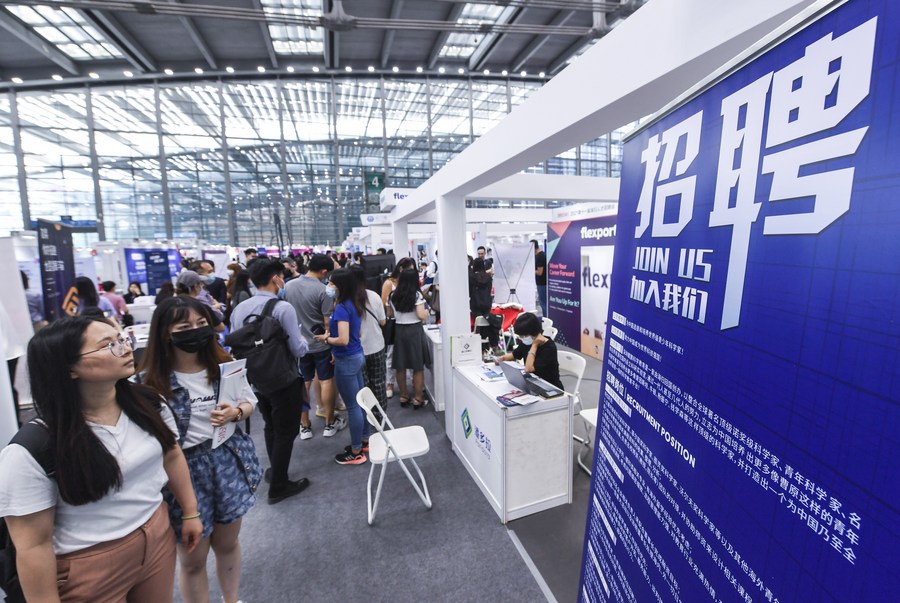 China is actively incorporating its long-standing employment-first approach into its pro-growth measures to help cushion the economy against potential impacts from heightened uncertainties.

China's surveyed urban unemployment rate stood at 5.5 percent in the first quarter of this year, up 0.1 percentage points from the same period last year, data from the National Bureau of Statistics (NBS) showed.

China's employment has remained generally stable since the beginning of this year thanks to its employment-first policy and ever-increasing support for struggling businesses, said NBS spokesperson Fu Linghui.

Employment and economic growth are mutually reinforcing, and thus job creation has been put high on the policy agenda. Chinese policymakers have repeatedly pointed out that job security and price stability are both key underpinnings for keeping major economic indicators within an appropriate range.

Prioritizing employment enabled China to achieve 2.2 percent growth in 2020, making it the only major economy to achieve positive expansion during a year that saw the outbreak of the COVID-19 pandemic. While the country did not set a numerical target for overall growth that year, it aimed at creating over 9 million urban jobs and ended up adding 11 million.

China will be able to achieve its potential economic growth as long as it can realize maximum employment, noted Premier Li Keqiang after China's annual legislative session in March this year.

"This year, we will step up the implementation of macro policies, and focus our fiscal and monetary policies on achieving employment targets," Li said.

The job market cooled in March after a heady start in the first two months, with the urban unemployment rate edging up 0.3 percentage points from February to 5.8 percent, while the unemployment rate among those aged between 16 and 24 stood at a biting 16 percent.

The number of urban job seekers in 2022 is at the highest in years, which includes a record 10.76 million college graduates. Meanwhile, companies bearing the brunt of a complex global situation and sporadic domestic COVID-19 resurgences are cutting back on hiring.

The March unemployment figures have prompted China to make extra efforts to achieve its annual job creation goals, as during this month companies usually resume hiring following the Chinese New Year holiday, said Zeng Xiangquan, a researcher with the Renmin University of China.

China aims to create over 11 million new urban jobs and keep a surveyed urban unemployment rate of no more than 5.5 percent in 2022, according to a government work report.

To that end, Chinese authorities are striving to revitalize market entities, ensure employment for key groups, and support flexible employment.

Noting that micro, small and medium firms hold around 80 percent of the country's jobs, Yi Gang, governor of the People's Bank of China, said the central bank will continue to crank up inclusive finance for these firms.

The central bank announced cutting the reserve requirement ratio for financial institutions by 0.25 percent from Monday to strengthen financial support for epidemic-affected sectors and smaller firms.

On the fiscal front, China vowed to implement a value-added tax credit refund worth around 1.5 trillion yuan (about 232 billion U.S. dollars), postpone payments of old-age insurance premiums and refund more unemployment insurance premiums, and provide one-off employment and training subsidies to small firms. These measures help save costs for firms so that they have more incentive to retain their staff.

To assist job seekers in better preparing for the labor market, China will provide them with no fewer than 1 million internship openings this year and allow localities to use the balance of the employment insurance funds to support vocational training programs.

Special attention is being given to key groups of job seekers. The country aims to add 2 million high-quality jobs for college graduates and ensure no less than 30 million people who had shaken off poverty are employed this year.

The flexibly employed, with their numbers coming in at 200 million and counting, will be eligible for stronger credit support and better protection from occupational hazards.

China aims to achieve an economic growth of 5.5 percent in 2022, with each percentage point of growth expected to help generate over 2 million jobs.