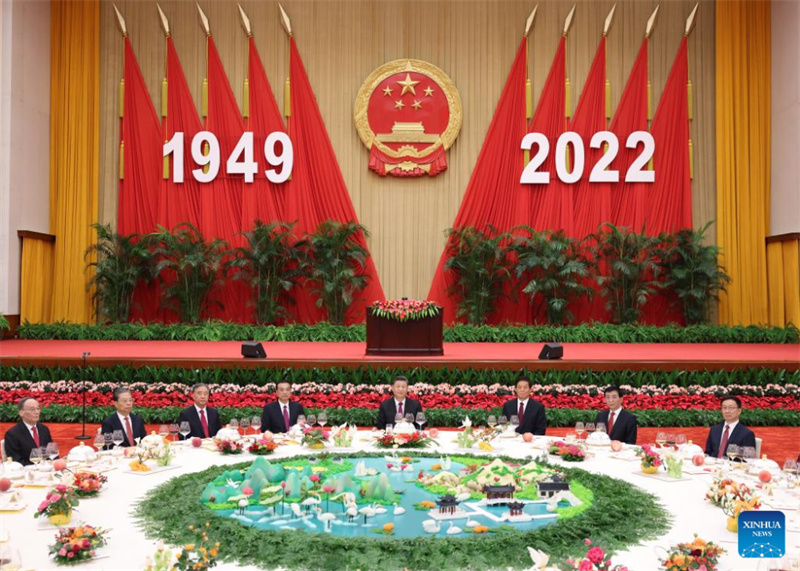 China's State Council holds a reception to celebrate the 73rd anniversary of the founding of the People's Republic of China at the Great Hall of the People in Beijing, capital of China, Sept. 30, 2022.

China's State Council on Friday held a reception at the Great Hall of the People in Beijing to celebrate the 73rd anniversary of the founding of the People's Republic of China. China's National Day falls on Oct. 1.

Addressing the reception, Premier Li Keqiang said that the CPC will convene its 20th National Congress this year, and stressed the vital significance of the event.

This year is a truly momentous one in the course of China's development, Li added. "In the face of complex and challenging developments both within and outside China, our entire nation, under the strong leadership of the CPC Central Committee with Comrade Xi Jinping at its core, has forged ahead together with drive and resolve."

Ensuring sound economic fundamentals is crucial to sustaining the steady growth of China's economy, Li said, stressing that China has taken forceful measures to ease shocks caused by greater-than-expected factors, and promptly and decisively introduced a policy package for stabilizing the economy. "We have the confidence and the ability to keep major economic indicators within an appropriate range."

He said with the reform and opening-up as China's fundamental policy, the country has pressed ahead with reform to develop a socialist market economy, pursued high-standard opening-up, kept foreign trade and investment stable, and deepened multilateral and bilateral business cooperation to keep China a favored destination for foreign investment and achieve win-win development.

Li stressed the commitment to conducting governance to deliver benefits to the people.

We have firmly opposed "Taiwan independence" separatist moves and external interference, and actively promoted the peaceful growth of cross-Strait relations, he said.

Li also stressed the efforts China has made to work with other countries to meet global challenges and promote peace, stability, development and prosperity in the world.

Li closed his speech by calling for rallying even more closely around the CPC Central Committee with Comrade Xi Jinping at its core, following the guidance of Xi Jinping Thought on Socialism with Chinese Characteristics for a New Era, and forging ahead in a concerted effort to build China into a great modern socialist country that is prosperous, strong, democratic, culturally advanced, harmonious and beautiful.

Vice Premier Han Zheng, also a member of the Standing Committee of the Political Bureau of the CPC Central Committee, presided over the reception.