The 31-year-old Russian leaped past 4.89m in the first attempt and saw off America's Olympic champion Jennifer Suhr and Cuba's world leading vaulter Yarisley Silva to secure the gold. 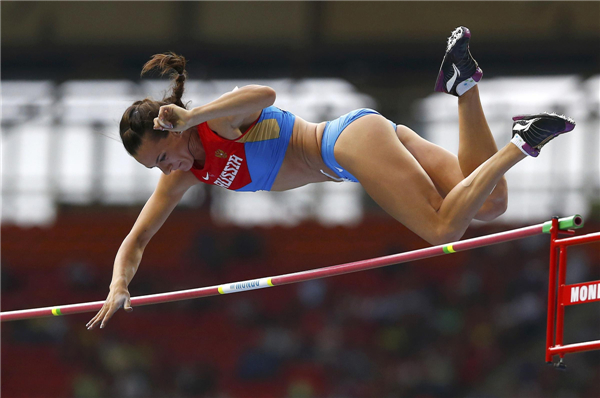 Elena Isinbaeva of Russia competes in the women's pole vault qualifying round during the IAAF World Athletics Championships at the Luzhniki stadium in Moscow, Aug 11, 2013. [Photo/Agencies] 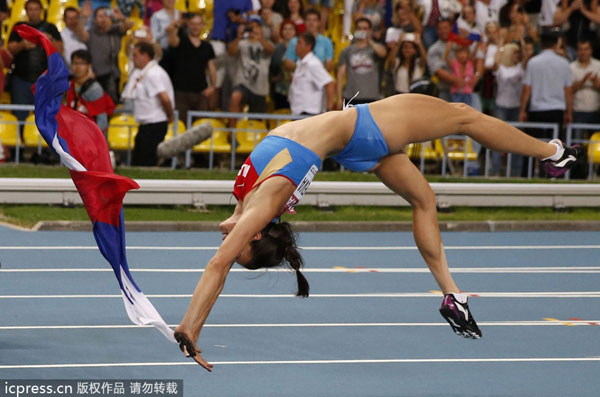 Isinbaeva, the 2005 and 2007 world titlist, then launched a challenge to her own world record, trying to clear 5.07, but failed in all the three attempts.

Suhr, who broke Isinbaeva's indoor world record in March, took the silver at 4.82m with a better countback while the bronze went to Silva, silver medalist at London Games.

"I am very happy for Yelena because she managed to please the home crowd. She really raised the standard of this event and I know it will be only her personal decision if she comes back to competing after a break," said Suhr.

"It is very hard to jump a World record at this kind of competition: there is too much emotions, adrenaline, tiredness. I am happy with the energy the crowd gave her, and I wish her the best."

Russia's Alexandr Ivanov claimed the first gold medal for the hosts Russia at the 2013 IAAF World Championships as he clocked a personal best of one hour, 20 minutes and 58 seconds to win the dramatic men's 20km walk race which saw two leaders fouled out here on Sunday. [Full story]