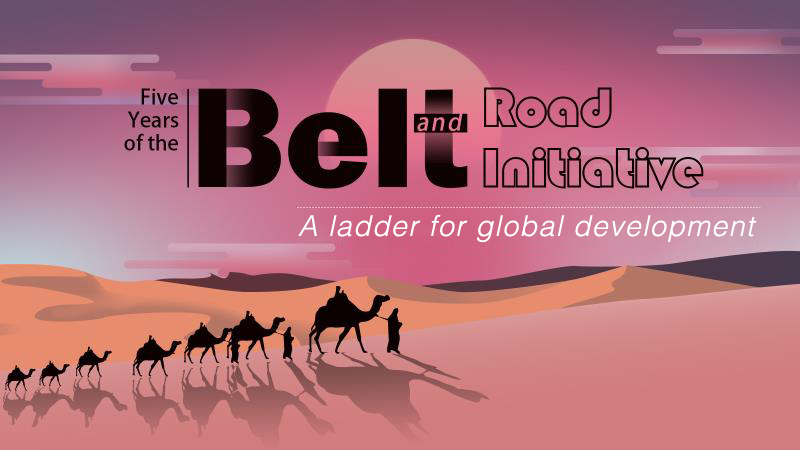 From the Moeris Reservoir of Ancient Egypt, the water systems of Ancient Rome, Dujiangyan irrigation system of old China, to the Beipanjiang Bridge, Hong Kong-Zhuhai-Macao Bridge and the Mombasa-Nairobi Standard Gauge Railway that China constructed in modern times, infrastructure is exerting profound impacts on human civilization.

In the past five years, the Belt and Road Initiative (BRI) has achieved broad progress in infrastructure connectivity. Major projects in the Six Economic Corridors are running smoothly.

For instance, initial preparations for the Moscow-Kazan high-speed-rail project and the Trans-Mongolian Railway (Aershan-Choibalsan section) have been completed. The China Railway Express exceeds 10,000 trains. The China-Myanmar gas and oil pipelines were completed in 2013 and 2017 respectively. The Addis Ababa-Djibouti Railway and the Abuja-Kaduna railway in Nigeria opened in 2017.

Moreover, Chinese companies have been playing an active role in the construction of over 20 ports in more than 10 countries, including the Gwadar port in Pakistan, the Kyaukpyu port in Myanmar, the Hambantota port and the Colombo port in Sri Lanka, and the Djibouti port in Africa.

In the aviation sector, China's civil aviation had established direct air travel to 43 BRI countries as of May 2017. In waterway logistics, China had signed bilateral maritime/river port agreements with 36 BRI countries as well as the EU and the Association of Southeast Asian Nations as of the same date.

A number of mature mechanisms and platforms serve as a guarantee for the connectivity of infrastructure. The Agreement for Further Cooperation on China-Europe Container Block Trains was clinched in April 2017. The founding of the Coordinating Council on China Railway Express Transportation and the Joint Working Group on China Railway Express Transportation marks the formal establishment of an international railway cooperation mechanism.

The positive impacts of these projects and mechanisms are becoming increasingly apparent. Take the Mombasa-Nairobi Standard Gauge Railway as an instance. The “century project” has shortened Mombasa-Nairobi journey from 10 hours to four, reducing logistical costs by 10 to 40 percent.

With the Addis Ababa-Djibouti Standard Gauge Railway put into commercial operations, the journey from Ethiopia to Djibouti has been reduced from one week to just one day. The railway also serves international humanitarian purposes, transporting more than 100,000 tons of food to Ethiopia during the drought.

Infrastructure connectivity has dramatically boosted employment opportunities in BRI countries. The construction of the Mombasa-Nairobi railway provided 40,000 jobs for local people. At present, more than 1,500 Kenyans are working on the railway's operations.

In addition to transportation infrastructure, Chinese companies have also invested heavily in industrial parks in BRI countries, aiming to increase their level of industrialization. The Eastern Industry Zone in Ethiopia, for instance, is home to 50 enterprises, six of which are foreign firms including Unilever.

The BRI is also a boon for multinational companies, of which the American company Caterpillar is a typical example. Thanks to the BRI, the company's sales in the Asia Pacific, Europe, Africa, and the Middle East accounted for 46 percent of its total sales, exceeding the North American market in 2017. In the same year, the growth rate of revenue from the Asia Pacific market reached 39.5 percent, the fastest among all its markets.

Infrastructure connectivity is the cornerstone of economic prosperity and social stability. While the existing assistance mechanisms are not supportive enough in scope, strength and continuity, the BRI has offered China's solution to the world.

To better promote infrastructure connectivity, consensus on green construction should be reached. All parties involved need to make full use of the existing mechanisms to promote the concept of green infrastructure construction. Unified environmental standards should also be set to ensure the sustainability of infrastructural development.

The Belt and Road: Face to Face is a program co-produced by China Economic Net and VSH News TV.
Photo

Miss Grand International 2018 held in Yangon, Myanmar
Insight
Commentary: China's fight against COVID-19 good example for world handling major epidemic
In the current battle against the outbreak of the novel coronavirus disease (COVID-19), China has spared no efforts to protect its people and assume responsibility as a major country to contain its worldwide spread, setting a good example on tackling a major epidemic.
Commentary: Governance strengths to ensure China's victory in two-front battle
The year 2020 is bound to be monumental for China as it strives to hit a historic landmark in the country's long-running story of progress. The sudden strike of the novel coronavirus epidemic only makes the endeavor more epic.
Commentary: "Two sessions" postponed for better advancement
Following relevant laws, rules and procedures, the moves were made responsibly. They are necessary and timely, conforming to the Constitutional principles and the current situation of epidemic control. The moves also demonstrate the concept of putting the people's interests as the top priority.